5 Discoveries That Prove Aliens Were Here

The original mechanism apparently came out of the Mediterranean as a single encrusted piece. Soon afterward it fractured into three major pieces. Other small pieces have broken off in the interim from cleaning and handling, and still others were found on the sea floor by the Cousteau expedition. Other fragments may still be in storage, undiscovered since their initial recovery; Fragment F came to light in that way in 2005. Of the 82 known fragments, seven are mechanically significant and contain the majority of the mechanism and inscriptions. There are also 16 smaller parts that contain fractional and incomplete inscriptions. 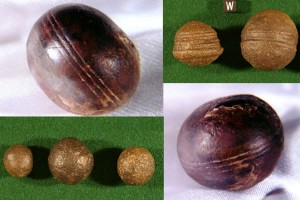 The Klerksdorp spheres typically range in diameter from 0.5 to 10 cm. As illustrated by Heinrich, they vary widely in shape from either approximate or flattened spheres to well-defined discs and often are intergrown. Petrographic and X-ray diffraction analyses of specimens of these objects found that they consist either of hematite (Fe2O3) or wollastonite (CaSiO3) mixed with minor amounts of hematite and goethite (FeOOH). Observations by Cairncross and Nel and others indicated that many of the Klerksdorp spheres found in unaltered pyrophyllite consist of pyrite (FeS2). The color of the specimens studied by Heinrich ranged from dark reddish brown, red, to dusky red. The color of those objects composed of pyrite is not known. All of the specimens of these objects, which were cut open by Heinrich, exhibited an extremely well defined radial structure terminating on either the center or centers of a Klerksdorp sphere. Some of these objects exhibit well-defined and parallel latitudinal grooves or ridges. Even specimens consisting of intergrown flattened spheres exhibit such grooves. 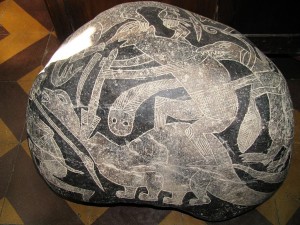 The stones are composed of andesite. They vary in size from 3×2.5×1.5 cm to 40 cm. As a result of weathering, they have developed a thin patina. It consists of a weathering rind in which weathering has turned some of the feldspar into clay, resulting in a softer material, rated 3 to 4 on the Mohs scale of mineral hardness, which can be scratched.

They are shallowly engraved with a variety of images, some directly incised, others by removing the background, leaving the image in relief. The images vary from simple pictures on one side of a pebble, up to designs of great complexity. Some of the designs are in styles which can be recognized as belonging to the Paracas, Nazca, Tiwanaku, Ica or Inca cultures.[1]

Some of the images are of flowers, fish, or living animals of various sorts.[1] Others appear to depict scenes[2][3] which would be anachronistic in pre-Columbian art, such as dinosaurs, advanced medical works and maps. 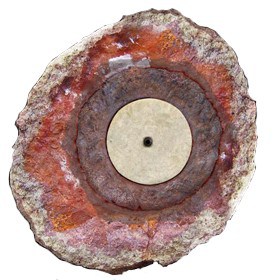 In 1961, three people were out searching for geodes for their gem and gift shop in Olancha, Calif. One of them picked up a geode common to the area, “but it somehow seemed different,” explained to Leonard Nimoy in an episode of his TV show “In Search Of …”

Mike Mikesell, one of the three, broke a diamond saw blade cutting through it back at the shop, and he made a shocking discovery. Within the geode he found what appeared to be a modern device later compared to a spark plug—but how old must it be encased as it was in the geode?

It could be as ancient as 500,000 years old, hundreds of thousands of years before advanced civilizations are thought to have inhabited the Earth. Virginia Maxey, another of the three discoverers,

said at the time that a geologist examined the fossils around the device and dated the device at 500,000 years old or older. 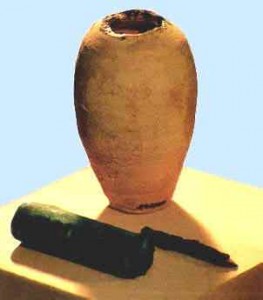 The Baghdad Battery, sometimes referred to as the Parthian Battery, is the common name for a number of artifacts created in Mesopotamia, possibly during the Parthian or Sassanid period (the early centuries AD), and probably discovered in 1936 in the village of Khuyut Rabbou’a, near Baghdad, Iraq. These artifacts came to wider attention in 1938 when Wilhelm König, the German director of the National Museum of Iraq, found the objects in the museum’s collections. In 1940, König published a paper speculating that they may have been galvanic cells, perhaps used for electroplating gold onto silver objects.[2] This interpretation continues to be considered as at least a hypothetical possibility. If correct, the artifacts would predate Alessandro Volta’s 1800 invention of the electrochemical cell by more than a millennium.