4.7/5 - (3 votes)
As the planet faces the dawn of a sixth mass extinction, scientists are searching for clues about the uncertain road ahead by exploring how an ancient ecosystem collapsed and bounced back from traumatic upheavals. A new study follows the lengthy collapses and revival of South African ecosystems during one of the “big five” mass extinctions, the Permian-Triassic event, revealing unexpected results about the types of animals that were most vulnerable to extinction, and the factors that might best predict community stability during times of great change. The study’s authors–including Peter Roopnarine, PhD, of the California Academy of Sciences–say inventive, cutting-edge modeling techniques helped highlight the critical importance of understanding food webs (knowing “who eats what”) when trying to predict what communities look like before, during, and after a mass extinction. The thought-provoking study is the first of its kind. 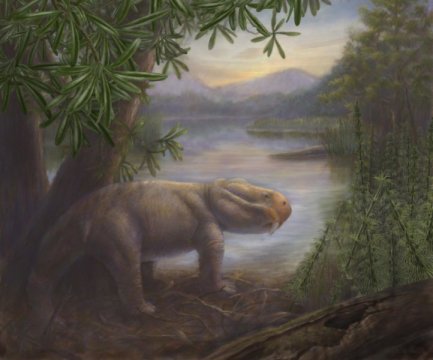 “There is no real precedent for what’s happening to our planet at the moment,” says Roopnarine, who co-authored the study with Kenneth Angielczyk, PhD, of Chicago’s Field Museum. “We can’t look into recent history and find this particular cocktail of accelerated climate change, habitat destruction, and global extinction. We can, however, explore instances of extreme crises in the fossil record–looking far back in time to reconstruct what happened, and how an ancient ecosystem would respond.”

As Curator of Geology, Roopnarine is accustomed to thinking in “deep time”–a geologic reference to the vast, multimillion-year timeframe some scientists use to unravel mysteries from Earth’s pre-human existence. Past extinctions and climate perturbations may lack the human factors driving today’s phenomena, but Roopnarine says those periods “contain vital clues” about the ways natural communities respond to crises and rebuild.

“The challenge with researching extinctions that happened more than 200 million years ago is that there is not enough fossil or other geological evidence to recreate a perfectly complete ancient ecosystem,” says Roopnarine. “It’s a bit like knowing a long, complex experiment–a mass extinction–was conducted, but nobody took notes. That’s where the reconstruction and modeling comes in.”

Roopnarine and Angielczyk were interested in the factors that encouraged or impeded stability while these ancient South African communities faced large-scale disturbances. They wondered whether the roles each species played in the broader ancient ecosystem had more influence on stability than species richness–the number of different species in a system– and the number and strength of interactions among species. The scientists decided to use a clever form of mathematical modeling to dig into the importance of these variables in (sometimes spotty) fossil food webs.

“It’s difficult to compare food webs over such an enormous timeframe–especially when there are gaps in the fossil record,” says Roopnarine. “For each time slice, we used a ‘real’ pre-extinction ecosystem full of the species we know existed to help create several alternate models of food webs for the same place and time. We always held the number of species constant, but made changes to the roles each animal played as well as the links between predators and their prey.”

After generating several alternate food webs for each important period, the scientists examined each to see how stable they might have been. Results were surprising.

“We saw that, after disturbing a pre-extinction community and all of its alternate models, the real community always emerged as the most stable,” says Roopnarine. “Since we held species richness constant, we know that each species’ ecological roles–the jobs in the food web–are the key factors influencing big-picture stability. It’s amazing that some of these ancient ecosystem communities may have remained relatively stable despite huge biodiversity loss.”

Aside from the glaring absence of human influence, mass extinctions during the Permian still looked quite different than the ecological upheaval we see on Earth today. Modern conservation efforts tend to center around large animals–such as tigers, elephants, and wolves–and top predators in peril, while Roopnarine and Angielczyk show that small amniotes (reptiles and ancient mammal relatives) were most vulnerable during the early phase of this long-ago period of extinction.

“It’s surprising that small amniotes were the species initially most at-risk,” says Roopnarine. “It doesn’t fit with the terrestrial extinctions we see today, but it makes sense when you think about how different Earth looks after so much time and change.”

“What I’m saying,” Roopnarine adds, “is that it was a bad time to be a rat. We think they can survive anything now, but during the Permian and Triassic, their ancient cousins played an unlucky role in the larger community. The food webs at the time could remain stable if they were dominated by large amniotes and lacked smaller ones, but not the other way around. Though individually successful, collectively the smaller species could not support very stable communities. Over time, the quality of a single business matters less than the quality of the overall economy.”

Every line in an intricate food web represents powerful ancient ecosystem interactions and exchanges of energy. Clues from past systems that recovered or failed following disasters help scientists peer into the future of the ever-changing natural world. This study’s results are an urgent call for an increased focus on modern food webs–an area of research Roopnarine says needs increased attention in a time of unprecedented environmental stress.

“We need to understand the relationships between the species we’re driving to extinction, and the roles they play in ecosystem stability,” says Roopnarine. “We know the collapse of Atlantic cod wreaked havoc on marine ecosystems, but we know very little about the ways most species’ ecologies relate to stability. It can be surprising which species help hold ecosystems together. We desperately need more data for the modern environment.”