Essay – Alliances and Signs of Empire Waning (By Mankh) 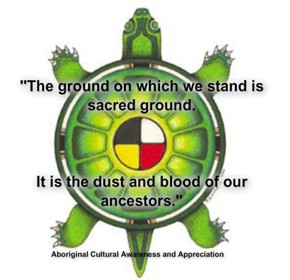 Not so far from the madding crowd of Global Corporate Empire and its superpower media bowl amping good guy v. bad guy — Obama, Kerry, Harper, Putin, Maduro, the Dalai Lama, Charlie Sheen, the Pope, Miley Cyrus, did I miss anyone? — is the reality of cooperation amongst like-minded yet distinct groups or Peoples.

The showboat boxing match with its attempts to blame everything on one person is often a smokescreen for faults of the blamer’s system, in this case Empire, the trans-national corporate-stat(e)us-(and thus by definition fascist)-quo, oligarchy, anti-Mother-Earthers, call it or them what you will.

In one corner of the smokescreen is rugged individualism, celebrity worship with its militant and/or soporific followers, and in the other corner, techno-slick mechanisms breeding Us (often US) v. Them. And in a third corner is corporate-state sponsored division and its bastard child, violence, whose aim is to overthrow democratically elected leaders — most recently, Ukraine’s Viktor Yanukovych, and ongoing attempts at Venezuela’s Nicolás Maduro.

But if we think beyond the corners of this Plato’s Cave of a box, arrows of light suddenly begin to enter. Community, solidarity, pluri-national… to name a few terms the aim of which is to join singular whistlings into a symphonic whole, rather than divide-and-conquer, the inherently destructive weapon of mass-colonialism.

How is this cooperative concept actually playing out on the geo-political chessboard? Various examples make for the gist of this essay, along with noting the trending global-view that the Empire is waning, though by no means down for the count — rather, feeling boxed into a corner and swinging madly with panic at the glimpse of its waning power.

Holding strong and showing no sign of weakening, Venezuela, under the banner of the Bolivarian Revolution, is warding off the infiltrative machinations of the Opposition and its US with others backing (though 34 people have been killed1). Much of Venezuela’s success stems from its broad base of support, both from the country’s people which includes the police, National Guard and Military. They respect Maduro who follows the guidelines of Chavez who followed those of Simón Bolívar’s who followed Simón Rodríguez, as well as cooperative efforts throughout Latin America:

The Chavez inspired Law of Communal Councils continues to provide the backbone of local citizens having the ability to bring about constructive changes.

Think Outside the Nations of Governments

The practical philosophy of Buen Vivir or Sumak Kawsay accentuates the pluri-national, yet this use of “national” relates not only to different Nation-States and Peoples but also to harmony and sustainability with Nature in its fullest sense, in other words, respect for Nations of birds, trees, waterways, etc.

Perhaps one of the great hurdles of the 21st century thus far is the implementation of this worldview into the world of geo-politics.

The Ecuadorian Constitution, as of 2008, includes Rights of Mother Earth, yet to what extent President Correa is living up to the implementation is in question:

According to the Shuar Peoples,

Bolivia has also adopted The Law of Mother Earth. The motives of Evo Morales have also been questioned, yet in his case it is essential to remember that he is Bolivia’s first Indigenous President, and who can know the kinds of pressures he faces as far as balancing the needs of the country — the needs of Indigenous Peoples, providing for the citizenry as a whole, and for Pachamama.

One key area is the “Isiboro Sécure National Park and Indigenous Territory, known as TIPNIS. … Bolivia has been embroiled in conflict for the past year over the planned construction of a 182-mile highway, 32 miles of which would cut through TIPNIS, a vital ecosystem — located at the geographic heart of South  America — that links the Andes and the Amazon basins”

Alliances, yes, but the question remains as to how many parties will be pleased.

Walking a Mile with Whatever Footwear You Got

Up north on Turtle Island, “Moccasins on the Ground” and a coalition of Native Peoples are providing an example of working to protect Mother Earth’s resources as well as the Peoples’ cultural heritage and spiritual integrity:

According to Debra White Plume, Oglala Lakota: “Our Red Nations have all opposed KXL pipeline and called upon all Lakota to defend our water. We can’t become complacent. We need to be ready and trained if KXL comes here.”

It’s not just the pipeline that is a threat but the infrastructure that goes with it:

Long-standing alliances between various Native Nations and Tribes are receiving support from people of all walks of life:

For a more a specific list of Native and non-Native allies, see this link under the header “Mother Earth Accord Indigenous Peoples Endorsements.”
http://www.ienearth.org/indigenous-resistance-kxl-tar-sands/

The Bear Comes Out of Hibernation

Russia’s President, Vladimir Putin, has not backed down in the face of USE (United States Empire)-EU posturing.

Though coming from a more geo-political-economical vantage point, another example of alliances standing up to the USE and its affiliates is highlighted in a recent article by Pepe Escobar:

Somewhat under the saber-rattling rhetoric radar, China and other countries are proceeding with their business:

And from the same article, another example of alliances without borders:

The Strait and Narrow Path

Another key area on the resource map is the Strait of Hormuz.

If You Meet the Buddha on the Road, Walk Alongside Him or Her

Though less in the geo-political strategizing category yet still having such undertones is the call for greater bonding amongst Buddhists of various locales. It is fascinating to see how the plight of Buddhists mirrors some of the 500-plus-years plight of Indigenous and African Peoples, and many others.

Colonialism — with its shiny new labels of capitalism, neo-liberalism, free market economy, and its not so shiny labels of disaster capitalism and corporate-state fascism – is no stranger to the world scene. Yet far older, wiser and friendlier are the roots of Indigenous cultures and Peoples whose quests for enlightenment outshine the desire for material gain.

“The solidarity that countries in Buddhist Asia showed towards each other in the distant past i.e. pre-colonial era, has greatly evaporated or become non–existent. The sense of kinship of being fellow travelers in a spiritual journey overarched by Buddhist precepts and bonded by common religious beliefs and foundations no longer act as a reference point to summon or render assistance even between Buddhist peoples based in neighbouring countries at times of need.

“What we are now faced with is an increasing challenge to an ancient, indigenous Buddhist civilisation which is gentle, accommodative and pacifist by later introduced religious cultures that have a track record of intolerance and violence and close association with colonialism and a self-declared objective of world conquest.

“During the last five hundred years or so, since the beginning of the western colonial era, the governance and steering of the world was very much in the hands of powerful western nations using their mono religio-cultural framework as terms of reference in policy making and implementation of policy. That era is now drawing to a close.”

Good week for:
Additional firearms training, after an Indiana police chief shot himself in the leg while trying out a weapon in a gun shop, the second time in 15 years he’d suffered a self-inflicted gunshot wound. “I need to pay more attention,” admitted David Counceller.