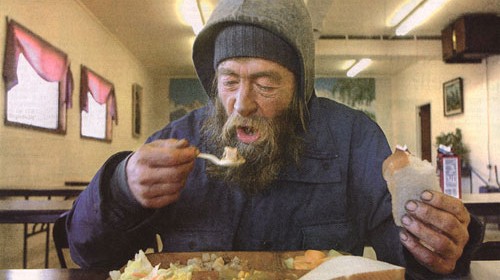 “Everyone has the right to a standard of living adequate for the health and well-being of himself and of his family, including food, clothing, housing and medical care and necessary social services, and the right to security in the event of unemployment, sickness, disability, widowhood, old age or other lack of livelihood in circumstances beyond his control.”

The Supremacist Control Freaks are at it again.

You can watch the two short videos, approximately 1.5 and 3 minutes. Essentially, 90-year-old Arnold Abbott (an appropriate last name ), after preparing food in a church then serving it outdoors to the homeless was physically restrained, along with two pastors, because Fort Lauderdale, Florida, has an ordinance prohibiting such charitable acts. OK, after I stopped shaking my head then banging it on the desk I tried to figure the reasoning behind it.

Maybe the police were concerned that it was GMO food and not organic? Fat chance!

Must be some way to figure this out. Let’s see, selling Girl Scout Cookies  is OK, therefore business transactions are cool, therefore it has to do with money.

“More than 30 cities have passed or are considering such bans; of those, more than 20 have restricted food-sharing since January 2013 alone, according to a study published earlier this week by the D.C.-based National Coalition for the Homeless. Advocates of the legislation say allowing ministries and others to hand out meals aggravates homelessness because it lures homeless people away from city-run programs. But Michael Stoops, community organizer at the National Coalition for the Homeless, argues that the cities that have or are trying to pass these laws — Seattle, Los Angeles, Phoenix, Dallas, and Philadelphia, to name a few — are doing it because they want to scrub their neighborhoods clean of homeless people, making them more appealing to businesses.”

Gentrification in service of the almighty dollar.

Globally, this scenario has played out perhaps most prominently in defense of sport, which is in defense of tourism and business, so there’s that almighty dollar, again.

Remember the recent Not Everybody’s World Cup in Brazil where paramilitaries were on rooftops so as to control protesters,  many of them from poor or lower classes.

Then there was the 2008 Olympics in Beijing: “Homeless Swept off Streets for Olympic Image.” A short video shows a Chinese man whose livelihood depends on collecting and redeeming plastic bottles; the Olympics curtailed that.

And the 2000 Olympics: “Sydney’s homeless to be removed for Olympics.” What’s ironic and hypocritical about the Fort Lauderdale incident is that the Church is supposedly a sacred American institution, yet even the actions of a Church-inspired “brother’s keeper” nonagenarian must bow to the dictum of: clean streets and clean people equals dirty, er, clean, business.

“’I’m going to have to go to court again and sue the city of Fort Lauderdale — a beautiful city,’ Abbott told Local 10. ‘These are the poorest of the poor, they have nothing, they don’t have a roof over their heads. How do you turn them away?’”

Perhaps some Amerizen koans will shed some light on the issue:

As Michael Stoops notes, some argue that feeding encourages homelessness and that the food should be served in appropriate shelters. Shelters are, perhaps, a workable solution but even if that was the answer, why weren’t the Ft. Lauderdale police saying, ‘Hey, folks, the food looks good, we’ll help you move it to a shelter.’

The Imprint of Church and State

The mammon-based society flies in the face of God, Church, and any apple pies that the 90-year-old may bake. And doesn’t this all just transcend labels of God, Church, and stereotypical Americana? The real issue at hand (and mouth) is feeding hungry human beings for whom a meal is probably the highlight of their day, emotionally, nutritionally, and communally.

As Russell Brand points out: “…America just had midterm elections where $4 billion was spent on campaigning… But feeding the homeless? That’s illegal.”

A brief look at the history of “In God We Trust” on the coin of the USEmpire realm will shed some light.

First off, “It is also the motto of the U.S. state of Florida.”

“In 1956, the nation was at a particularly tense time in the Cold War, and the United States wanted to distinguish itself from the Soviet Union, which promoted state atheism. As a result, the 84th Congress passed a joint resolution “declaring IN GOD WE TRUST the national motto of the United States. The law was signed by President Eisenhower on July 30, 1956, and the motto was progressively added to paper money over a period from 1957 to 1966… The Reverend M. R. Watkinson, in a letter dated November 13, 1861, petitioned the Treasury Department to add a statement recognising “Almighty God in some form in our coins.” At least part of the motivation was to declare that God was on the Union side of the Civil War.”

The phrase is thus connected with taking sides during hot/cold war time. And now it’s a different kind of civil war, with the Supremacist Control Freaks against the People who most need a hot meal, not a cold shoulder; globally it’s a war against the poor and unsightly.

One of the most prominent suggestions for easing the world’s food problems – many of which are created by trans-national agri-businesses and land-grabs – is local, sustainable, small-scale-farming. Maybe cities could help develop garden-tending programs for the homeless.

The attitude toward the homeless is also important. In context, the word “homeless” implies that a home is needed to be a complete person, that someone cannot be at home with his/herself unless he/she is under a roof. Granted, having or living in a home has many comforts and advantages yet for some of our fellow two-leggeds being homeless is a choice to, for example, not participate in the mainstream system – no rent, no mortgage, no bills, no car payments, etc. There needs to be a greater respect for the person, the human being, so as to help get past the derogatory aspect of the label. Like turtles and hermit crabs, in essence, each of us must learn to be at home within ourselves.

Yet, more practically, from the National Coalition for the Homeless Report, October 2014:

“There are many reasons why people are homeless, including the lack of affordable housing, lack of job opportunities, mental health and addiction, and physical disabilities. This is a multi-dimensional problem, and it should be approached in that manner. To make homelessness disappear, cities have to be creative and address all the root causes of homelessness.”

In response to Manchester, NH, legislation:

“Homeless woman, Lindsay Deannesolis feels as though she is being discriminated against. She says, ‘Oh you’re homeless. You are going to cause a problem. Not necessarily. Yeah, a lot of us are down on our luck but we’re trying. We’re trying to find a job.’”

“Ben Charles, who runs Crazy Faith Outreach, an organization who serves 500+ meals a week to the individuals living on the street states, ‘We just want to create a sense of community, and that’s all we’re doing.’”

“Since November 2010, volunteers from more than 30 local faith-based communities and civic organizations have made meals seven nights a week. Over time, the organization faced increased pressure from local business and city leaders to find a more permanent location to serve their meals. Long time volunteers teamed up with the City Manager to locate and secure a property downtown. Through community partnerships, the organization acquired serving tables, card tables, chairs, a storage shed, a canopy, and solar lighting. Today, Dining with Dignity serves between 60 and 100 people every evening. Since November 2010, the program has served more than 100,000 meals which cost more than $350,000.”

For a more thorough look at the issues, with reports from various cities and what can be done to alleviate problems, see: National Coalition for the Homeless Report, October 2014.

Abbott is a Keeper

Abbott and Mayor Jack Seiler can be seen shaking hands on TV where, post-incident, they debated the issue. How much the Mayor is trying to save face after “hundreds of angry emails over Abbott’s run-in with police, and over the city’s ordinance” remains to be seen.

From the TV segment:

“What Arnold is doing is actually a very kind and compassionate act,” Seiler said. “We’re just simply asking him to do it in a proper location.”

“We have tried many, many times to find indoor locations to feed the homeless,” Abbott retorted. “And they have not been available to us.”

“’I’m waiting for the Mayor to come through with his promise,’ Abbott said while feeding the homeless at the church following the debate.’”

It’s easy to tell from his actions, Abbott loves to feed people. He is his brother’s and his sister’s keeper. There are many more Abbotts out there.

You are the result of 4 billion years of evolutionary success.
Act like it!