Essay – The Genocide Under the Rug: travelogue (By Mankh) 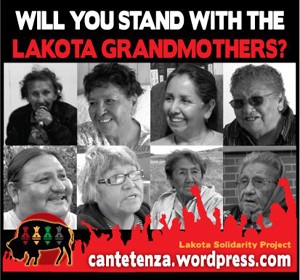 Part of the mission statement of the Lakota Grandmothers Truth Tour reads:
“Wagunpi Woashake Ikickupi (Lakota Elders Take Back Their Strength) is a grassroots movement to end the genocide of the Lakota people and support the full renewal of matriarchal leadership by Lakota Grandmothers on Pine Ridge and across the Lakota Nation. The movement also works to educate non-Natives about the situation of the Lakota, mobilize long-term solidarity networks to benefit Lakota Elders, and build solidarity with other indigenous resistance movements worldwide.”

Clear skies. Sunrise on warm spring morning, April 10th. Traveling from Long Island (Sea-Wan-Hak-Hee) to Manhattan (Manahatta) to support the Lakota grandmothers. That the original place-names are in parentheses is an attempt to educate the reader, honor the timeless-past-present, and an indication of the schizophrenia of our modern society.

Place is Land. Place is People. Land is People and People is Land. Land . . . Place . . . People . . . with the Indigenous perspective, it is all connected. But the Settlers put their rubber-stamp of division on virtually everything, thus the parentheticals serve as reminders of our roots.

I come from Settler heritage but have an affinity for Native ways and an empathy for the challenges Indigenous Peoples face today, plus a deep respect for the various cultures and wisdoms. As wild as it may seem, I have memory of being an Eskimo, thousands of years ago.

Natives remind us that we are all remembering our Indigenous selves, so as to catch up with the present. Whether fantasy or reality, my memory and this awareness helps me tune-in to the plight and potential solutions with the planet.

Whether you have such memories or not it doesn’t matter; what matters is right now, right here, and the future of the species and Mother Earth.

As the bus gets closer to the city, I suddenly notice a variegated cloud cover.

Manhattan and it is sunny again.

At a bus stop to go downtown to Washington Square Park (actually a Circle) for the gathering, I talk briefly with an elder woman. She has an accent. Though living a long time in the city, she is from Peru. This chance meeting, plus a brief encounter with another elder woman at the Long Island bus stop (a “conserve open spaces” bumper sticker on her car), all reminds me that an event often starts before the official event starts.

Respect for Elders is not an event, not a gathering that starts at certain time — it is a way of life that America has all but forgotten; where many wind up in nursing and rest homes, their advice rarely ever sought on tv screens or other mainstream smoke screens. But the Natives have a way of helping us remember.

That the grandmothers are speaking out against the ongoing genocide of their people and culture, motivated me to attend. The best way to find out what’s going on and to help, if you can, is to go to their website:

At the official gathering, there is jazz being played in the Park; the music is not directly connected with the gathering, but it blends nicely. A Native daughter sings a song honoring mothers. Then one of the grandmothers asks that all recorders and cameras be turned off while she says prayers for the food and the day. Native traditions have what’s called a spirit bowl or plate, so that the spirits get fed before the humans eat; spirits get hungry too, the grandmother says with a smile, plus it is a way of connecting the visible and invisible worlds, honoring those who have passed on, and giving thanks for the meal.

A report after the event, on the Lakota grandmothers’ site, states:

The theatre group gave a brief history of the effects of the U.S. colonizers on the Lakota. Perhaps most known is the 1890 massacre of 312 Lakota men, women, and children at Wounded Knee. The brief performance ended with the chant: “Help the elders take back their strength!”

As nice a day as it was weather-wise and as moving as it was to meet the Lakota grandmothers and others in Washington Square Park (a place rich with political and cultural protest history), another parenthetical statement must be added. As Tiokasin Ghosthorse of the Cheyenne River Lakota Nation, and host of First Voices Indigenous Radio, has written: “In many Native languages there is no concept nor word for “park”. The relationship with the land has never been broken but for only a foreign language who may wish it so.”

Whatever the terminology or lack there of, the Lakota want their territory (in the South Dakota and other sections of Turtle Island) back; the broken Treaty of Fort Laramie (1868) is a large piece of that puzzle.

Back home the next day, the news shows me, again, that it is all connected:
“‘Time to Rise Up’: Oklahoma Grandmother Bike-Locks Herself to KXL Pipeline Machinery”

Some other grandmothers who have made the news over the years are Doris “Granny D” Haddock, and Peace Pilgrim.

And, of course, you can probably learn something from your own mother or grandmother, as well as tuning your ear and heart (which has the word “ear” in it) to the Mother Earth (which also has the word). Are not mothers and grandmothers some of the best listeners you’ve ever known? Does not Mother Earth hear you when you’re out hiking or taking a walk by yourself? Now is the time for two-way conversation, which is something the United Nations and other potentates have yet to learn how to do.

In the article, “United Nations Fails to Accommodate Lakota Genocide Complaint,” Lakota Grandmother Charmaine White Face explains: “It’s not surprising because we have been going there for thirty years, and they have yet to stop the genocide, contrary to their own mission statement to protect nations large and small.”