Restaurants pay it forward on Thanksgiving 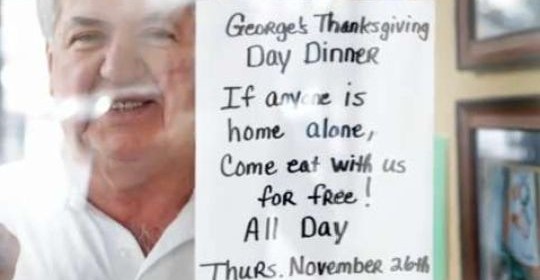 If you are broke and hungry on Thanksgiving Day, George Dimopoulos will feed you. No charge.

If you are lonely, he will hug you. Also no charge.

Then he will feed you.

There was a time, though, when he had nothing. When he was 12 years old, and hungry, and alone.

“Nothing worse,” he says. Not the hunger so much, because that can quickly be cured, but the isolation.

Imagine it: You’re a child, adrift in your country’s largest city, scuffling for work and an acknowledgment that someone cares.

“No need to talk about that,” he says, but later he does, if only a little. And it’s an easy path to follow from the boy in Athens to the hand-written sign on the door of the Greek restaurant and diner south of Six Mile:

“George’s Thanksgiving Day Dinner. If anyone is home alone, come eat with us for free!”

It’s actually the 10th time Dimopoulos has made the offer. Last year, he served 79 people, along with flocks of paying customers at his holiday buffet.

But that was all word of mouth. This time around, it’s word of Facebook and Reddit. Dimopoulos has gone viral, and a consultant friend has warned him to game-plan for 1,000 diners.

The public has stepped up, because it’s about Thanksgiving and because if you give people a chance to be kind, they usually will.

Volunteers, including a group from Madonna University, will assist the staff. Strangers have called with their credit card numbers and said hey, put a few of those dinners on my tab.

As for Dimopoulos, he’ll be ready. He works ferocious hours anyway, typically 5 a.m. to 9 p.m., and after 46 years in the restaurant business, he still loves to cook.

“They can go back a second time if they want,” he says. “A piece of pie, another piece of pie.”

Some of his guests may leave by themselves, but he will do whatever he can to make sure they go home happy.

Growing up in Greece

At 69, Dimopoulos has thick white hair and an accent that isn’t as thick as he thinks.

He speaks quickly and directly and makes himself as clear as consomme: Work hard, treat people right, you’ll do OK.

The sixth of seven children, he grew up on a farm in the southernmost part of Greece. There were more olive trees than opportunities; it would have been a three-hour walk each way to high school.

In Athens, he scrounged for work, food and shelter. Sometimes strangers helped. He grew stronger and smarter, and then he joined the Army, which made him a cook.

Two years later, he left the Army and went back to a factory job. The only future there was Kathy, the woman he met and married. His uncle and sisters were in Detroit, so in 1969 that’s where he went, too.

The uncle owned a Coney Island at Michigan Avenue and Livernois. Dimopoulos worked there every day and bused tables at Topinka’s Country House at night. Topinka’s was closed on Sunday and it felt like a vacation.

“I was happy,” he says. He and Kathy had a one-bedroom apartment, they had ambition, and after three years they had $28,000 to invest in a restaurant of their own.

He’s telling the stories at a table in the main dining room. A woman in a long brown coat pays her check and then gently interrupts him.

“Thanks for what you do for the people,” she says. A few minutes later, two older women stop to kiss him on the cheek.

“He’s always helping people out,” says Georgia Koutroulis, the oldest of his 24 nieces and nephews.

Koutroulis, 55, has been working the cash register, and she keeps an eye on it to make sure no customers are unduly delayed.

“He’ll deliver food to people in the neighborhood himself,” she says. Or a regular will mention a relative in the hospital, and he’ll package a quart of soup to take on the next visit.

Dimopoulos, who lives in Novi, dismisses the stories with a wave. He has plenty of soup.

“I’ve been blessed,” he says, but blessings are sort of like luck: the harder you work, the more likely they are to find you.

Those early days in Detroit, when the extent of his English was “ham and eggs”? He plugged away every day and told himself, “I’m gonna get better tomorrow.”

That first restaurant begat others. The modest empire now has George’s Senate Coney Islands in Taylor, Livonia and Dearborn, with his two sons sharing the Livonia store and Kathy mostly running Dearborn.

The other locations are closed Thursday. Dimopoulos will report for duty in Northville at his usual pre-dawn hour, because the Greek dressing and the soups and the rice pudding and so many other things need to be fresh and demand his loving touch.

His family will gather at the restaurant to celebrate the holiday at 5 p.m., lining up to share the same $22.95 buffet as the people whose wallets will never leave their pockets. Steak, ham, turkey and stuffing, chicken lemonado, pumpkin pie, tradition.

The doors will open at 9 a.m., with Thanksgiving dinner from 2-7 p.m. For reservations, call (734) 927-1126. For companionship, just come on in. For future reference, Dimopoulos will do the same thing on both Easter and Greek Orthodox Easter.

Last Thanksgiving, a young man who said he was homeless brought 18 people. Not a problem.

What if it was your house, he asks, and a hungry stranger tapped on your door. Wouldn’t you make him a turkey sandwich or invite him in?

“Same thing,” he says. Just tack on Greek salad and his special meatballs, and multiply it by maybe 1,000.

It’s Thanksgiving, and this is what he’s thankful for. He can feed people.

He can reassure himself that they’re not alone — and he can know that he’s not, either.