The Flint water crisis. A health catastrophe uncovered by a doctor at the Flint, MI Public Hospital. Dr. Mona as she is referred to is also a professor at Flint, MI state university’s College of Medicine. Call it fate, but Dr. Mona was in the right place at the right time when she discovered the horrific safety hazards posed by consumption of the drinking water in Flint, MI.

What she discovered was that the public water system which is run by the government, had been poisoning the public via the water being consumed. As a way to save money, the Flint, MI government authorities decided they would save money by no longer purchasing their drinking water supply from the city of Detroit, but rather pump it from the local Flint River. For years, the residents of Flint have complained about the quality of the drinking water. They claimed that it was killing their pets, destroying their crops, and had a foul smelling odor as it came out of the faucets in their homes. All the time, unaware that their own government had traded their health to save a few dollars.

Car manufacturer General Motors even took themselves off of the public Flint water because it was corroding engine parts. The state could not have been totally blind to the matter either, because the state government buildings had filtered water coolers installed shortly after the switch. It was revealed by later findings that the public water being pumped into the homes of Flint residents was not only full of disease causing bacteria and high levels of carcinogens, but it was also discovered that it was loaded with lead.

Health officials determined that the lead levels were in fact so high, that even a single sip of the Flint drinking water would have been enough to cause a child to have lead poisoning. Mark Edwards, who is a internationally recognized water safety expert from Virginia Tech University was contacted by a Flint mother to test the water in her home. Her child had been showing signs of illness for quite some time. Initial tests showed that the water in her home would be considered hazardous waste. This is water that her family and other Flint residents had been consuming since the state decided to switch the water supply. Even after providing evidence to state authorities, the state denied that there was a problem with the Flint drinking water.

Dr. Mona attempted to get copies of the state’s data regarding the quality of the Flint water supply, but was denied access to the information. She did not let that roadblock halt her suspicions though. She was determined to find out the truth. Determined to prove that the Flint water crisis existed. She and her team at the Michigan State University began running their own tests on the water supply and gathering their own data. This data proved that the public water supply in Flint posed extremely concerning safety hazards. Their findings showed that in the 17 months since the water supply had been switched, the number of children with lead poisoning had doubled. In some counties, those numbers tripled.

Despite the additional proof provided to them, the state government still denied any issues with the public drinking water. According to the local government, there was no Flint water crisis. The Department of Environmental Quality claimed Dr. Mona’s efforts were “unfortunate” and that she was causing “near hysteria” throughout Flint. The state government claimed that she was skewing the numbers to create untruthful results. On the brink of giving up, Dr. Mona found new strength to carry on her plight to prove there was a problem with the Flint water supply. Determined to be a voice for all of the children that she cared for as well as all Flint residents, she pushed on. 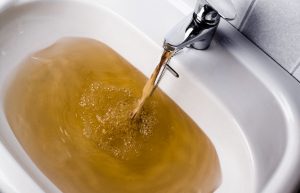 The population of Flint is nearly half of what it was in the 1970’s. Having faced many hardships, many residents that remain have often been considered too poor to leave. In 2011, the state took over control of Flint due to finance issues. After that, the town board members were nothing more than puppets of the state. The state, at one point even refusing a unanimous vote by the Flint local board to get off of the Flint River water. It was as if the local Flint government had been hijacked by the state, leaving them powerless.

Thanks to Dr. Mona’s ongoing efforts and determination, she finally got the state to conceded it’s position and admitted that their numbers were incorrect and that there was in fact a lead problem with the Flint water supply. It was discovered that special additives that impede corrosion of lead pipes were not added after the town had been switched to the Flint River water supply. This caused increasing amounts of lead to flake off within the pipes that supplied water to all of Flints residents and businesses. The residents of Flint were exposed to the effects of this problem throughout each day. They bathed in it, they drank it, they consumed food made with it. All the time, the state telling them it was safe.

In the end, Flint was reconnected to the Detroit water supply. The governor of Flint would later issue an apology to the local residents, acknowledging the Flint water crisis. Fifteen state and city officials were indited for the contamination of the Flint water supply. Flint has since received over half a billion dollars in funding from the federal government, the state, and from private donations to replace all of the public water pipes that supply the town of Flint. The state eventually enacted a registry for all those affected by the Flint water crisis. They have even been supplying free bottled water to Flint residents since accepting responsibility for the Flint water crisis. That is, up until this spring when the state determined that they would end the program based on tests that revealed that the Flint water supply is now at safe levels for any contaminants. However, they do recommend continued use of filtration systems. Many residents are still skeptical about the state’s determination.

Resident’s still complain of unexplained ailments, loss of hair, miscarriages, and more. All who believe these health issues are ongoing effects of the Flint water crisis. Many residents will never trust the water supply or the state ever again. Virginia Tech water expert, Mark Edwards says that Flint isn’t the only place with water supply issues. Dr. Mona considers Flint to be a crime scene. One with both victims and villains. If anything good came out of the crisis, it’s better education and better healthcare. But even she, like many residents remains wary of the Flint water supply and says that to this day she only drinks bottled water in Flint.

Pediatrician Mona Hanna-Attisha is the whistleblower who exposed the dangerous levels of lead in Flint, Michigan’s drinking water. In her 2016 TEDMED Talk, Mona sheds light on how the people of Flint are finding hope after the crisis and working together to rebuild their American dream.
tagged with Contamination, environment, Flint, government, Lead Poisoning, michigan, pollution, sickness, water

“Never think you’ve seen the last of anything.”