The Navy Has a Supergun 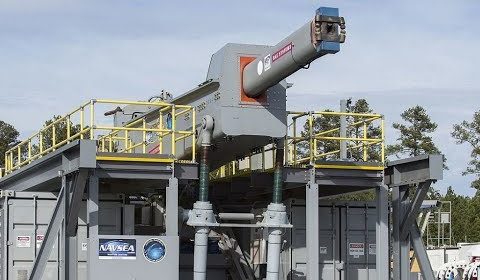 The US Navy is developing a supergun that can destroy a target at about 100 miles away with a bullet that can go eight times the speed of sound when fired.  It would destroy with pinpoint accuracy the target that it is going towards in a matter of minutes.   If everything goes as planned it can be the most powerful weapon in the world.  The bullet is not shot out by gunpowder but with a big surge of electrical energy and destroys its target with sheer power.

It will probably be between 5-10 years before the US Navy will be able to install them on ships.  Right now, the warships can only reach their targets if they are about 13 miles away.  The new gun will let them be at a safer distance, up to 100 miles away, when they attack the enemy.

The navy is researching how they can keep the charge at a sufficient rate to keep firing at supersonic speeds.  It takes about five minutes for the gun to charge to full power before it can launch its bullet.

On game day, Cowboys Stadium consumes more electricity with its air conditioning, massive scoreboard, and other power-sucking amenities than Liberia, a nation of 3.7 million people.