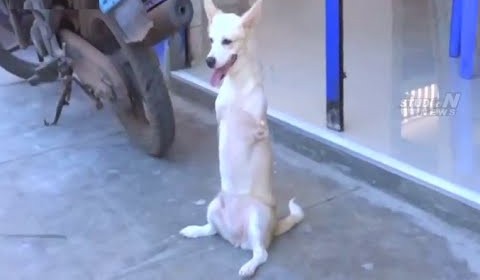 Born without her front legs and abandoned on the street by her original owners, Estrella, a one-and-a-half-year-old mutt, has not let her disability hold her back.

Adopted by a couple running an animal shelter in the small Peruvian town of Tinga Maria, Estrella has gained celebrity status by hopping around — just like a kangaroo.

An increasing number of visitors have come to the shelter since her arrival, with many families eager to adopt her.

Ivan Escobar and his wife Elva Carhuaz say they found Estrella when she was six months old.

“She is like a baby who starts learning how to walk. That is how we see her, from that day (when they found Estrella) until today, that is what she learned,” Carhuaz said.

She is a rising star in her hometown in Peru.

Estrella was born without her two front legs and was abandoned by her owner.

Now, the year-and-a-half old is jumping for joy.

Since being taken in by a couple that owns an animal shelter, Estrella has made new doggie friends and has amassed a legion of human fans.

While living at the shelter, the wide-eyed, plucky doggie has attracted a number of people who want to adopt her.