A warmer world will be a hazier one 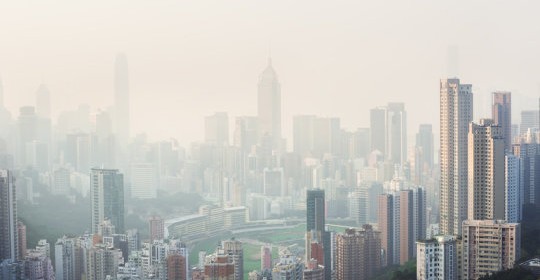 Aerosols, tiny solid and liquid particles suspended in the atmosphere, impact the environment by affecting air quality and alter the Earth’s radiative balance by either scattering or absorbing sunlight to varying degrees. What impact does climate change, induced by greenhouse gases (GHGs), have on the aerosol “burden”–the total mass of aerosols in a vertical column of air?

Past research done on climate models has found inconsistent results: Depending on the model, climate change was associated with an increase or decrease in aerosol burden. But a new study using the newest and state-of-the-art computer models, published today in Nature Climate Change, shows that under climate change associated with GHG-induced warming most aerosol species will register a robust increase, with implications for future air quality.

“Our work on the models shows that nearly all aerosol species will increase under GHG-induced climate change,” said climatologist Robert J. Allen, an assistant professor in the Department of Earth Sciences at the University of California, Riverside and the lead author of the research paper. “This includes natural aerosols, like dust and sea salt, and also anthropogenic aerosols, like sulfate, black carbon and primary organic matter. Stricter reductions in aerosol emissions will be necessary for attaining a desired level of air quality through the 21st century.”

Allen explained that an increase in GHGs will not only warm the planet, but also affect climate in many different ways. For example, GHGs will lead to changes in the hydrological cycle and large-scale atmospheric circulation. These changes, in turn, will affect air quality and the distribution of aerosols–irrespective of changes in aerosol emissions.

“Changes in the hydrological cycle and atmospheric circulation are complex, however, and could lead to opposing changes in the distribution of aerosols,” he said. “The models show that GHG warming will lead to more global-mean precipitation, which should reduce aerosol burden because the aerosols are rained out; however, GHG warming will also lead to a decrease in precipitation in certain regions, as well as a global mean decrease in the frequency of precipitation. These latter two changes, which would be expected to increase the burden of atmospheric aerosols, outweigh the former change. The result is more aerosols in the atmosphere.”

Allen and his team found their results using a multi-model data set: the Atmospheric Chemistry and Climate Model Inter-comparison Project (ACCMIP), which is supplemented with the Coupled Model Inter-comparison Project version 5 (CMIP5). The researchers analyzed the ACCMIP and CMIP5 data bases, using model experiments with fixed aerosol emissions (based on the year 2000), but different climates–one based on 2000, the other based on 2100, with the difference of the two experiments indicating the aerosol response to GHG induced warming.

The researchers also conducted similarly designed experiments using the National Center for Atmospheric Research (NCAR) Community Atmosphere Model (CAM) versions 4 and 5. Results from these models showed that even when emissions are held fixed, GHG-induced warming by 2100 drives an increase in aerosol burden and elevated concentrations of aerosol species on the Earth’s surface.

Future research avenues for his research team include a deeper understanding of the mechanism by which climate change drives an increase in aerosol burden. Specifically, the team is interested in investigating why models project a decrease in large-scale precipitation in the Northern Hemisphere during June-July-August.

Allen was joined in the research by William Landuyt at Exxon Mobil Research and Engineering, NJ; and Steven T. Rumbold at the University of Reading, the United Kingdom.

The research was supported by grants from NASA and the National Science Foundation.