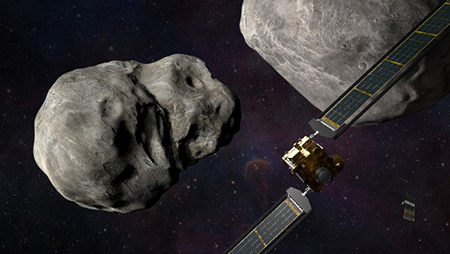 NASA has initiated the DART mission, short for Double Asteroid Redirection Test. It was launched from Vandenberg Space Force Base, California to study the effects of asteroid deflection as a method to save the Earth from future devastating collisions by asteroids.

The big question…. If an asteroid is pummeling towards Earth, can humanity be saved with a simple nudge?

NASA is studying just that with a first-of-its-kind mission to deflect an asteroid by intentionally crashing a spacecraft into it. The mission offers a rare, real-world chance to test a planetary defense strategy that could protect Earth from a potentially catastrophic event in the future.

The DART mission, costing upwards of $325 million, launched from Vandenberg Space Force Base in California. The spacecraft rode into orbit atop a SpaceX Falcon 9 rocket. 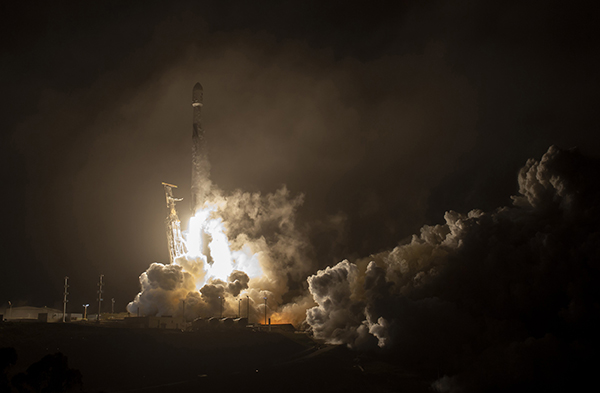 The probe will spend almost a year traveling to an asteroid system more than 6.5 million miles from Earth. The mission’s target is Dimorphos, a space rock measuring approximately 525 feet across that orbits a much larger asteroid named Didymos, which measures around 2,500 feet across.

Neither Dimorphos nor Didymos pose a threat to the planet, according to NASA, but the system is a “perfect testing ground” for whether crashing a spacecraft into an asteroid can actually alter its motion in space. 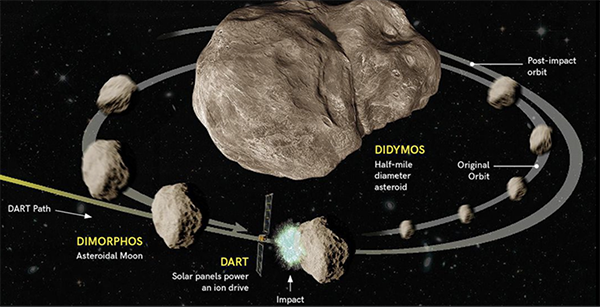 NASA will attempt asteroid deflection by smashing the DART spacecraft into Dimorphos at a speed of around 15,000 mph. Telescopes on Earth have been studying Didymos and its “moonlet” Dimorphos for decades, and have observed that the smaller space rock circles its larger counterpart once every 11 hours and 55 minutes, said Nancy Chabot, a planetary scientist at the Johns Hopkins University Applied Physics Laboratory and the mission’s coordination lead.

Chabot and her colleagues are attempting to see if the cosmic collision can alter Dimorphos’ nearly 12-hour orbit. NASA calculates that the maneuver will change the speed of the space rock’s orbit by just a fraction of a percent — a difference of only several minutes — but the shift should be detectable by ground-based telescopes.

“This isn’t going to destroy the asteroid — it’s just going to give it a small nudge,” Chabot said during a news briefing. “It’s actually going to deflect its path around the larger asteroid, so we’re demonstrating asteroid deflection in this double asteroid system.”

DART hosts a high-resolution imaging device that will beam pictures back to researchers. About a month before it reaches the binary pair, the camera will spot Didymos for the first time and navigate toward Dimorphos, DART will deploy a small CubeSat, built by Italy’s space agency, to trail behind and record the aftermath.

DART will approach it’s target at more than 6 kilometers per second, 10 times faster than a fighter jet and fast enough to leave a crater 10 to 20 meters across. Because Dimorphos moves around its parent at a leisurely half-kilometer per hour, the collision should kick the moonlet into a shorter orbit, a change that will be measured by radar instruments on Earth. Images from the Italian CubeSat will allow researchers to study the plume and the resulting crater, providing information about the asteroid’s composition.

The asteroid deflection mission will help researchers learn more about DART’s target. However, the scientific aspect isn’t the goal of the mission, which was sponsored by NASA’s Planetary Defense Coordination Office. The DART mission is different from your typical science mission where the objective is to publish as many scientific papers as possible. The main purpose is to demonstrate a technique to save the world in the event of an asteroid heading towards Earth.

Organic farms cannot use GMOs, pesticides or chemical fertilizers. Also, crops can’t be exposed to those things for three years before harvest.