At The Intersection of the Fault Lines

We believe to live the ordinary life, encased by the ordinary world.  The days grow shorter, and the nights grow longer.  We worry over trivial and great issues, hoping for someone to come and ease our pain and suffering as we enter the dog eat dog world to make ends meet.  It’s just an ordinary path that we walk surrounded by the daily drum of life, hounded by the horn-blowing motorists bent on getting from Point A to Point B, haunted by the hammers of construction, bombarded by the mindless chatter of those ensnared in electronic daze, and captivated by the sound of laughter from children in the park that think nothing of life’s tragedies but chasing endless dreams.  All this is nothing more than notes in an anguished composition, and we are dancing blind at the intersection of the Fault Lines.

Fault Lines begins with a poetic symphony, a Symphony of the City, which paints an ordinary world as one described above, but as with most intricate paintings, you have to look deeper.  You have to stare into that abyss of swirling color to see the dark streaks, the cracks, where the truth lies hidden, but it is a truth that we may not want to see.  Pain.  Suffering.  Loss.  Tragedy.  Violence.  Animosity.  Gunfire.  Citizens terrorized.  People in constant assault.  It’s a bitter pill that we do not want to swallow, and we would rather say, “What a beautiful painting,” and walk away.  But the truth is that there is no escape for we live in The Information Age, and we are surrounded by a media that forces it down our throats.  We are obliterated by an endless flow of babble dominating the airwaves that threatens the continued existence of serious transmissions.  Our tongues have fallen loose, swaggering from side to side, and we have forgotten that once upon a time with the wrong word said, and it would have been off with our heads.

Like most, I try to avoid the truth, but even in a doctor’s office, it found me waiting there. I remember looking over at a stack of magazines, and normally I don’t read most magazines because I don’t want to know what’s going on.  But on this day for whatever reason, I picked up a magazine, flipped through it, and found a photograph that I still remember today.  The photograph was of a small South African, I think, boy holding a gun.  The News story was of how he was used by a warlord to enact despicable terrors, and the story was both horrifying and heartbreaking.  I wanted to know what fate fell to this boy, but the nurse was now calling me in.  And I remember leaving that magazine on the chair beside me with that photograph facing upward in hopes that someone else would want to know the truth of what was really happening out there, and I remember this because of Homo Homini Lupus.

“They are not hallowed warriors

respected by those they protect.

They will have no parades.

No trumpets will sing their praises.

They will be remembered,

with pity or hatred.”

The sad truth is that we are not living in the past anymore for the past has been long buried and forgotten.  When we open up the history books and look at all those images and photographs, it is like looking into an alternate world.  We don’t remember what it was like then, and reading about it is like reading a work of fiction.  The world we live in today would be considered to them as one of those futuristic movies that they would watch and say, “I hope I never awake to that day.”  Somehow, we have awoken to that day, and we never saw it coming.  We have been distracted, dazzled, and hypnotized as the past has fallen away to the now, and that world we knew, our past has been erased.  And in its aftermath, our youth broken.  Still, we struggle to hold ground and refuse to admit it’s all gone to hell, but it can’t be fixed.  The future that lies ahead of us now is surely grim, and I hope to never awake to that day as I read the State of the Union.

I fear the future

of our bountiful nation

is in imminent danger

We are broken.  Our world has broken, fallen through monstrous cavities that break our heels, pull us down, and swallow us whole.  We try to jump away, clawing at distraction, and guided by the hum of technology, electronic toys to steal our minds away.  We can then dare not think of those living on the false promises of others, begging for the lights to not fade or the heat to not die because then all they will know is darkness and cold, and we can’t think of that.  We would rather be safe and warm and not know what turmoil rolls across this land, but trouble rolls this way.  And there’s no avoiding it.  Our television sets make sure of it, and the fault lines are electrified with truth, so raw that if in close range, we surely would be electrocuted especially if our minds have grown so numb that a simple fragment of truth like a gentle feather would burn instantly in one small breath.

We can’t outrun the ghosts of our past, and history has a way of repeating itself.  Wars that we should have learned from fall upon today, and more innocence is lost.  Soldiers have become marionettes in the politician’s Russian Roulette for they know not of strange lands and vicious enemies, and in the end, we lose.  And I think this as I read the Iraq Dilemma for we walk through a mine field today, and maybe the past should be laid to rest.  But Greed needs to die, and we need to stop chasing dreams of greatness, promises of a past that has been destroyed.

invoked the ghosts of Vietnam

that still haunted the nation,

though many tried to forget,

and raise specters of defeat

for our venture in Iraq.”

Have you ever wanted for someone to just tell you the truth?  The whole truth and nothing but the truth?  Even in conversation, the truth is diluted.  Nobody can tell you the honest truth because we feel this need to lie, to exaggerate, to paint over the facts, but when asked why, we don’t know.  Just somewhere along the way, we can’t tell the truth, and when the truth is exposed, we call it a Lie.  And we lie to ourselves all the time to feel better, to feel safe, to feel like things are going to be okay, but it’s a lie.  And if we continue to run from the truth, then we are all surely doomed, and someone needs to be brave enough to say what is really going on.  And Gary Beck does that, dishing out the ugly truth, but are we ready and willing to hear it?  Or we would rather continue to dance blind at the intersection of the Fault Lines? 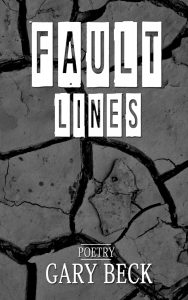 Available in paperback with a retail price of $10.99, and an ebook for $4.99. ISBN:19410585.
Published through Winter Goose Publishing. Available now through all major retailers. For  information or to request a review copy, contact:
jessica@wintergoosepublishing.com
Available on amazon: Fault Lines – A poetry collection
Share this:
tagged with book review, gary beck, mendelson, poetry

Forty percent of all food in the U.S. ends up in the trash, according to a new report by the Natural Resources Defense Council.The average family of four wastes $2,275 in food each year, or 20 pounds per person per month.