Can plants talk to each other? Possibly!! 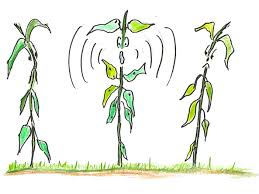 5/5 - (2 votes)
Have you ever thought to yourself, “Can plants talk to each other?” Unsettling news for vegetarians: Plants may communicate with one another by making sounds at frequencies that humans can’t hear. British and Australian researchers have discovered that the roots of corn saplings emit a constant clicking sound. When a similar sound was played in a lab, they found that corn roots grew toward the noise, much the way plants are known, ‘ to grow toward light. Sweet fennel may telegraph its presence to other plants too. The plant is known to release chemicals that slow the growth of other nearby plants.

When researchers put fennel in a plastic box that blocked those chemicals, they found that nearby chili pepper plants grew even faster than they would outside the presence of fennel. The researchers concluded that the chili plants “knew” fennel was nearby because of sound signals not blocked by the box, and grew more quickly to protect themselves in anticipation of the usual chemical attack from the fennel. Study author Monica Gagliano says that while her research doesn’t prove that plants are conscious, it “opens up a new debate on the perception and action of people toward plants.” Plants, she says, are not insensate objects, and should be treated as “living beings in their own right.”

Americans spend $109 billion a year on illegal marijuana, cocaine, meth-amphetamine, and heroin, according to a new study by the RAND Corp. That’s more than Americans spend at electronics and appliance stores.