You would think that police officers would be the most responsible gun owners… No? After all, they are experts, having received training in how to properly handle firearms — or so we would think!

If that were entirely true, then we wouldn’t be left wondering how a McCracken County deputy sheriff shot his own mother… In church… At a wedding.

McCracken County deputy Cory Golightly escorted his mother to a wedding. The wedding wasn’t in McCracken County. It was at the Bardwell Baptist Church in neighboring Carlisle County.

Nevertheless, Golightly saw fit to carry a gun in his jacket. Why he felt he would need a gun at the wedding is beyond our imaginations, but I guess in Golightly’s world, a wedding can be a dangerous place.

Right after the ceremony while leaving for the reception, the gun fell out of Golightly’s jacket and discharged, shooting his mother through the abdomen. This was no fleshwound either. His mother had to undergo abdominal surgery at a local hospital, where she is reportedly in stable condition. 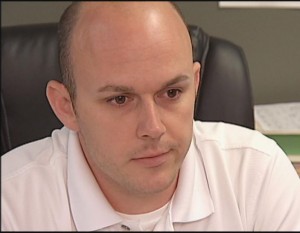 Deputy Golightly, meanwhile, has been placed on paid administrative leave while an investigation is conducted into the matter. The gun was not apparently not a department-issued weapon. It was Golightly’s personal firearm.

Of course, it doesn’t really matter that Golightly wasn’t in his jurisdiction, or that the gun wasn’t department-issued. The federal Law Enforcement Officers Safety Act (LEOSA), enacted in 2004, allows any “qualified law enforcement officer” to “carry a concealed firearm anywhere in the nation,” in spite of state and local laws. Oh, except for machine guns and silencers.

Feeling any safer yet?

The church’s pianist, Jeanine King, described her reaction when she heard the shot:

“My initial reaction was, ‘Oh my goodness. Could that possibly be a gun?’ Then my next thought was, ‘Gosh, who’s in the church with a gun?’”

The law enforcement community, of course, has been rallying in support of the deputy sheriff. Ballard County sheriff, Carey Batts, posted an instructive message on his department’s Facebook page. In it, he asked citizens “not to judge, but to pray” for the Golightly family. After all, “it is in times like these that we are reminded that we are only human.”

A nice sentiment, but that’s exactly the argument behind gun control laws. We are only human, all of us — law enforcement and civilians alike. We have a right to be as protected as possible from the human errors that accompany the public handling of firearms in places where people gather.

The good news here… The victim is expected to make a full recovery… and at least it didn’t happen on Mother’s Day.

Chinese doctors have performed 336 million abortions and 196 million sterilizations since it began encouraging small families in 1971. Without the country’s one-child policy, China says its 1.35 billion population would be 30 percent larger.