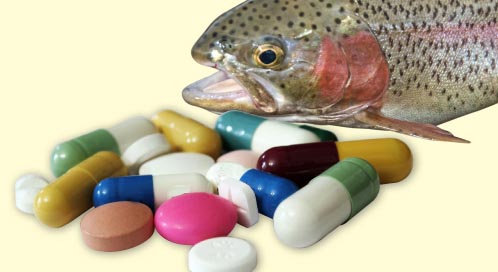 Psychiatric medications passing through sewage treatment plants could be dramatically changing the behavior of fish. After researchers discovered low levels of common anti-anxiety drugs called benzodiazepines in perch living downstream from a treatment plant in southern Sweden, they tested the same concentrations of the drug on fish in the lab. They found that the medicine made the fish lose their inhibitions, causing them to eat more than unexposed fish do and to be less cautious about straying from their schools—behaviors that, in the wild, could have major ecological consequences.

Drug-addled fish with the munchies might reduce populations of zooplankton, which could lead to blooms of the algae that zooplankton consume; bolder fish might also become more vulnerable to predators. Researchers say hundreds of different pharmaceutical drugs are likely slipping unchecked into waterways—and having unknown effects on fish and other vertebrates. “It’s scary when you think about it,” ecologist Tomas Brodin of Sweden’s Umea University tells BBCNews .com. “It’s a huge cocktail of drugs, and fish are experiencing it 24/7—breathing it, drinking it, and eating in it.”

Bad week for:
Calling 911, after a sick Washington, D.C., woman summoned an ambulance, but had to take a subway to the hospital when the two paramedics got into such a heated argument they ignored her.