The Milky Way and its closest neighbor, the Andromeda galaxy, are on course for “ a head-on collision,” says astronomer Roeland van der Marel of the Space Telescope Science Institute. But no need for precautions because the crash won’t happen for another 4 billion years. Researchers have long known that Andromeda, currently some 2.5 million light-years away, is moving toward us at 250,000 miles per hour. 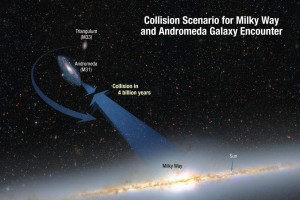 NASA’s Hubble Space Telescope’s precise measures of the galaxy’s motion show it heading right for the Milky Way. The meeting will be more of a merger than a crash: Since galaxies are mostly empty space, with stars separated by light-years, astronomers say it’s unlikely that any stars or planets will collide. The mash-up of gas and dust from the two systems, however, could give birth to new stars. Any earthlings still around by then would see more stars in the sky. But our solar system will likely remain intact.

“It’s not the load that breaks you down; it’s the way you carry it.”