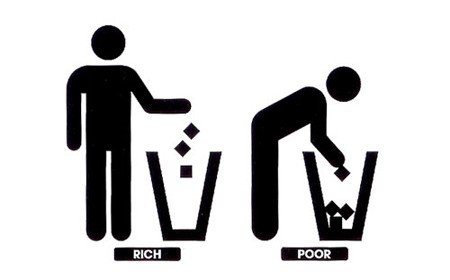 Many experts consider the wealth gap to be more pernicious than the income gap, as it perpetuates from generation to generation and has a powerful effect on economic security and mobility. Young black people are much less likely than young white people to receive a large sum from their parents or other relatives to pay for college, start a business or make a down payment on a home, for instance. That, in turn, makes their wealth-building prospects shakier as they move into adulthood.

Two major factors helped to widen this wealth gap in recent years. The first is that the housing downturn hit black and Hispanic households harder than it hit white households, in aggregate. Many young Hispanic families, for instance, bought homes as the housing bubble was inflating and reaching its peak, leaving them saddled with heavy debt burdens as house prices plunged in places like suburban Phoenix and inland California.

Black families also were hit disproportionately by the housing collapse, because heading into the recession housing constituted a higher proportion of their wealth than for white families, leaving them more exposed when the market crashed. Higher unemployment rates and lower incomes among blacks left them less able to keep paying their mortgages and more likely to lose their homes, experts said.

Discriminatory lending practices were also a factor. “We know that communities of color, their rate of subprime or predatory loans was twice what it is in the overall population,” said Tom Shapiro, the director of the Institute on Assets and Social Policy at Brandeis University.

Black families also suffered bigger hits to their retirement savings, the Urban Institute found. On aggregate, the value of black families’ retirement accounts shrank 35 percent between 2007 and 2010, while white families’ accounts actually gained 9 percent over the same period. With lower earnings and higher unemployment rates leaving them with a thinner safety net to begin with, black families were more likely to take funds out of the market when it was depressed, leaving them out in the cold as the market recovered.

“That reservoir of what you can dig into for emergencies and contingencies is a lot shallower in communities of color,” Professor Shapiro said. “That pushes black families to sling off assets, like I.R.A.’s or stocks, that you might have had another goal in mind for.”

Something similar may be happening as the housing recovery takes hold. “Some people talk about it in terms of a land grab,” said Professor Hamilton of the New School, as mainly white investors are buying foreclosed homes from disproportionately minority owners. “As the housing market starts to appreciate, some of those minority buyers might not be back.”

All in all, Hispanic families lost 44 percent of their wealth between 2007 and 2010, the Urban Institute estimates, and black families lost 31 percent. White families, by comparison, lost 11 percent of their wealth. The economic turbulence worsened a gap that has persisted for as long as social scientists have measured it, and has its roots in institutional racism, they said, which, for instance, prevented black Americans from benefiting fully from the G.I. Bill back in the 1940s and 1950s.

Even if blacks and Hispanics make progress in the years ahead as the economy improves, the persistence of the wealth gap has pushed many public policy scholars to recommend the adoption of more ambitious programs to help reduce worsening inequality.

But in the absence of such far-reaching measures, scholars and advocates remain generally pessimistic that the wealth gap will narrow even as members of minority groups increase their share of the American work force.

“The growth in the wealth divide is going to be very hard to close,” said Dedrick Muhammad, the senior director of the economic department at the National Association for the Advancement of Colored People, the civil rights organization. “I don’t have a positive feeling about racial wealth inequality resolving itself with the recovery.”

More than 541.000 people finished marathons in the U.S. last year, an all-time high.