Is there life on two Earth-like planets? 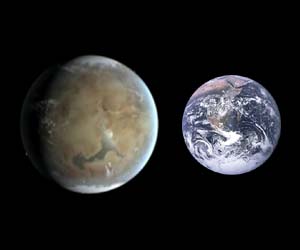 The two most Earth-like planets ever found have been spotted in a single solar system 1,200 light-years away. Astronomers monitoring data from the Kepler spacecraft said the two worlds, dubbed Kepler 62e and Kepler 62f, were the two outermost planets circling a star about a third dimmer and smaller than the sun. Both orbit within the habitable zone within which liquid water-considered a prerequisite to life as we know it—can exist.

The smaller of the two, Kepler 62f, is a particularly enticing find:
About 40 percent larger than Earth, with a year of 267 days, it orbits in the very middle of that zone, and computer models suggest it may be rocky like Earth. Scientists say the other planet, hotter and slightly larger, might be covered entirely in a giant ocean.

Whether water, let alone life, exists on either remains a matter of speculation, but the find strengthens astronomers’ conviction that our own Milky Way galaxy holds billions of planets that could resemble Earth. “It’s an amazing moment in science,” astronomer Geoffrey Marcy of the University of California, Berkeley, tells The New York Times. “We haven’t found Earth 2.0 yet, but we can taste it, smell it, right there on our technological fingertips.”