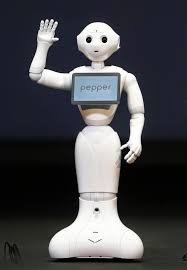 Japanese telecom firm SoftBank unveiled a new, robot last week that it claims “can recognize human emotion” thanks to technology that allows it to “communicate through emotion, speech, or body language.” Pepper is also equipped with microphones and proximity sensors, and will feature upgradable software, allowing users to install apps and updates to enhance its functionality over time.The robots will use cloud-based computing to share data to improve their emotion-recognition functions. Pepper, which is now serving customers at SoftBank stores in Tokyo, will go on sale to the public next year for about $2,000, and engineers say the robots could someday act as babysitters, nurses, and even emergency medical personnel. Pepper, which speaks and understands 17 languages, will also be launching internationally.