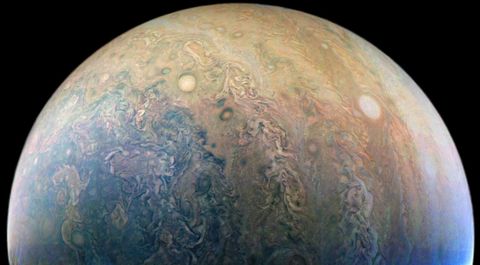 Jupiter is the fifth planet from the sun, and it is pretty amazing. On average this planet takes about 11 years to make it around the sun once.  The planet measures about 88,000 miles in diameter and is located about 450 million miles from earth.  Jupiter has four major moons that are larger than earth and one of them is larger than the planet Mercury.

On January 7, 1610 Galileo used his telescope to discover the planet and its four satellites – Io, Europa, Ganymede and Callisto.  Now there is a probe – Juno – orbiting the planet since July 2016.  Juno was launched on August 5, 2011 and it has cameras, sensors, and is powered by solar power.  It is hoped that it will send us more information of the planets weather systems.  The speed it travels at is 164,000 MPH and is above the hydrogen, helium and organic clouds.

The information that it is sending back is totally amazing.  It shows that the planet has some powerful storms, the poles of the planet look bluish with massive cyclonic storms.  The north pole storms rotate counterclockwise, while the south rotate in a clockwise motion.  The rotation of these storms is around 30 to 60 hours each and extend almost 1865 miles into the planet’s atmosphere.  They measure about 2500 miles wide at the center of each pole.

The planet Jupiter is closer to earth now than it has been in about 10 years.  You can see it in the early morning if you look south.  It is about 450 million miles from earth.  It was closest on May 8th.

If you traveled by the speed of light you could reach the planet Jupiter in about 40 minutes – if not it would take you about 500 to 600 days.