Paralyzed Pup That Nobody Wanted To Help

Nobody Wanted To Help This Paralyzed Pup. But Then A Model Spotted Him Crawling Along A Beach.

A relaxing walk along the beach is supposed to be a holiday highlight. However, for one vacationing model, it turned into a heartbreaking encounter. The paralyzed pup that was dragging his back legs across the ground to get to her seemed to be not long for this world without help, and she knew she couldn’t just leave him to die alone. 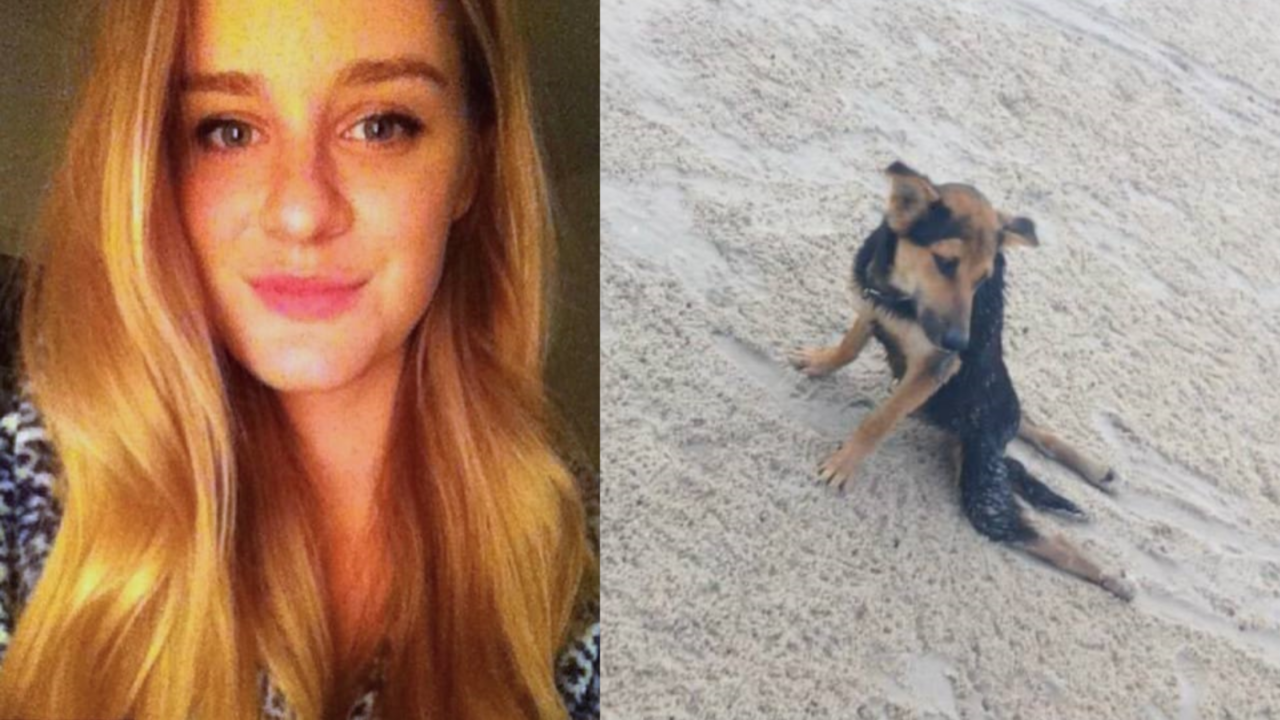 Ottawa-based Canadian model Meagan Penman shot to viral fame when the 22-year-old went to great lengths for a wounded animal she found on a beach. Penman was visiting Hua Hin in Thailand when an encounter with a helpless paralyzed pup proved just how caring people can be.

“I was just walking along the beach and saw what looked like half a dog sticking out of a small tide pool – I couldn’t understand what I was looking at so I went to have a closer look,” said Meagan. And she may have been taken aback by what she found. 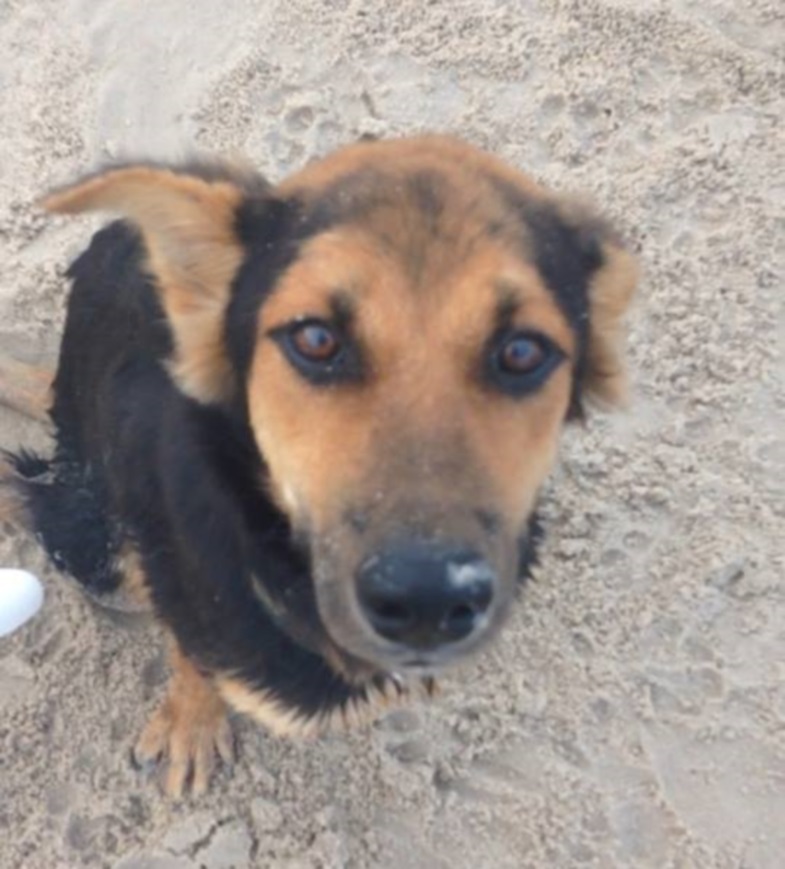 It was indeed a dog – a puppy, to be precise – but there was clearly something wrong with him. On closer inspection, in fact, Penman saw that the poor pooch had suffered a terrible injury. He couldn’t move his back legs at all and so was dragging himself across the sand just to greet her.

Alongside his paralysis, the paralyzed pup was suffering from a host of other serious health conditions, too: he was infested with ticks, was undernourished and had been eating sand just to survive. Despite his situation, though, the dog was very affectionate and just wanted some attention.

Penman knew that the dog wouldn’t be able to survive much longer on his own and that she had to do something to help him. “He would have been dead within the month if I hadn’t moved him,” she wrote in an online post. She named the pup Leo and then began contacting local shelters to find him a home.

Unfortunately, it wasn’t good news. “I tried to find a rescue center in the area to take him – but not one would, so I decided then that I would try to take him home with me,” she later explained. First, however, Leo would need veterinary care – and getting a dog out of Thailand wouldn’t be cheap, either. 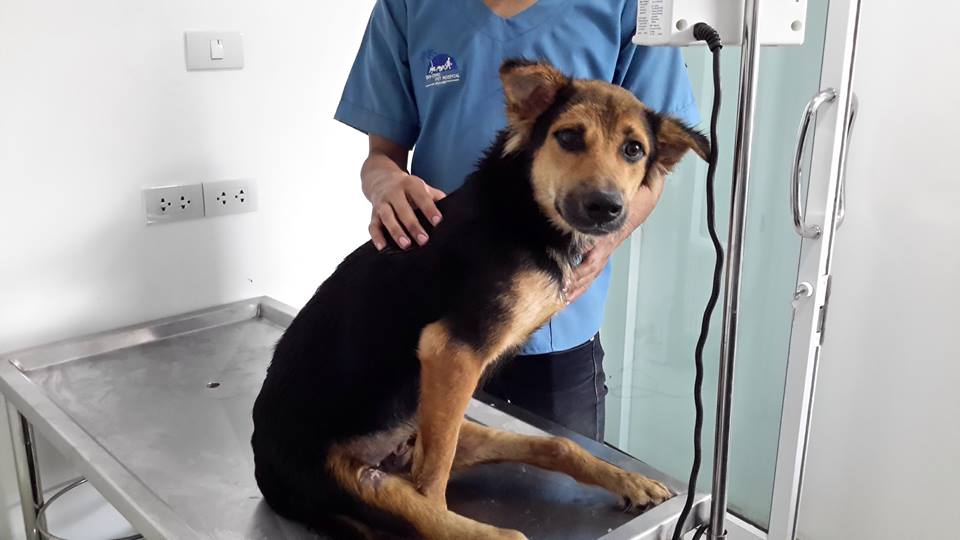 Penman knew, then, that if she was going to help the puppy, she would need financial assistance. So she uploaded the video she had taken of Leo’s discovery to social media and then created an online fund-raising page. Those were both in addition to a Facebook page to keep people updated on the puppy’s progress. 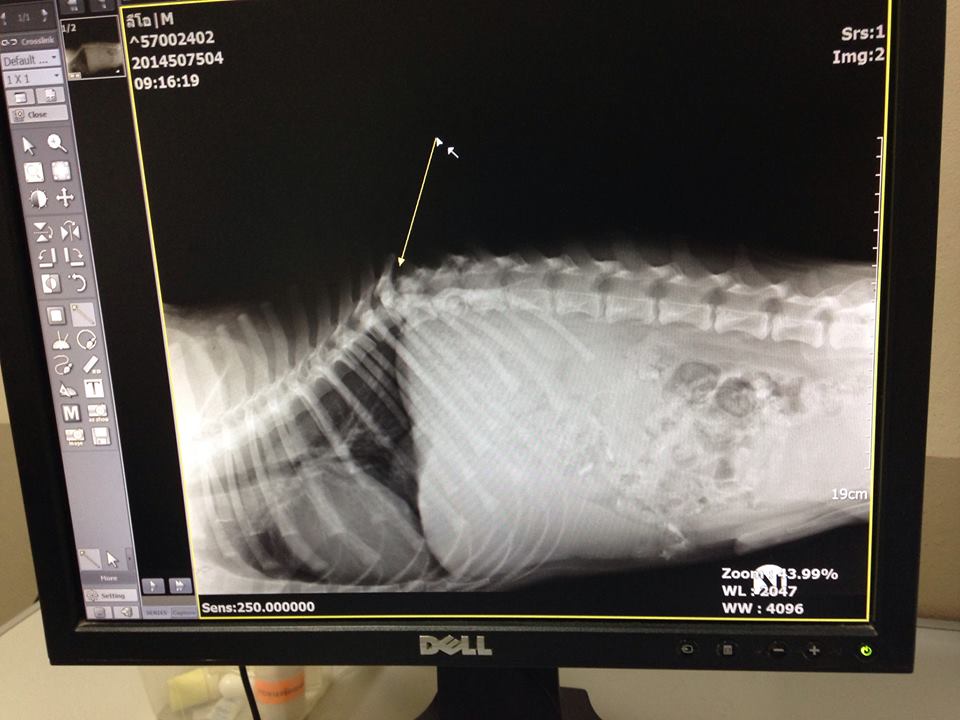 Meanwhile, she found a veterinarian to take a look at Leo. Along with his other problems, the little pup had scraped the skin from his hind legs from dragging them around. Worst of all, though, the vet told Penman that the paralyzed pup had broken his back and would never walk again.

On her fund-raising page, Penman revealed some details about how Leo got into the state she had found him in. “He lost the use of both of his back legs due to a motorcycle accident and the owner has done nothing for him,” she wrote.

“He’s less than a year old and there’s no way I can just let this go without trying to help,” she continued. “I’m not exactly sure how much everything will cost, but I think $4,000 will cover the initial vet costs/travel fees to get him out of Thailand.” 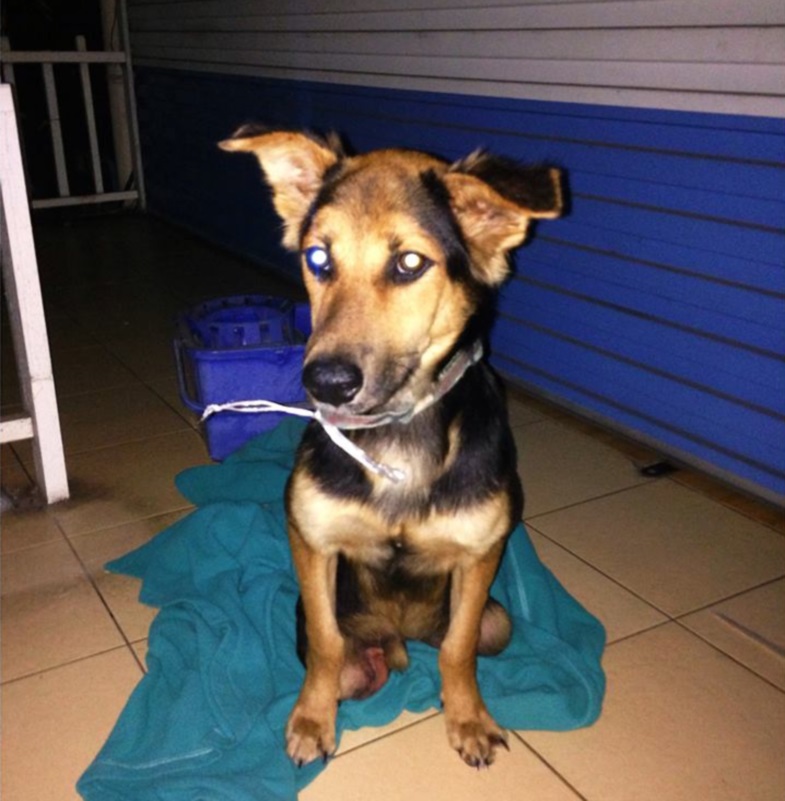 Unfortunately, it subsequently turned out that Leo needed more care than Penman had initially thought. Yes, he was also suffering from bladder stones and an infection. His recovery up to the point where he could be taken back to Canada would take months, adding an extra $1,000 to his predicted medical bills.

“I really didn’t know what I was getting myself into at first, but next thing I knew I was in the middle of a huge process that took months to finally pull off,” Penman added. “There were times where I was so stressed and frustrated, but I would not let myself take no for an answer.” 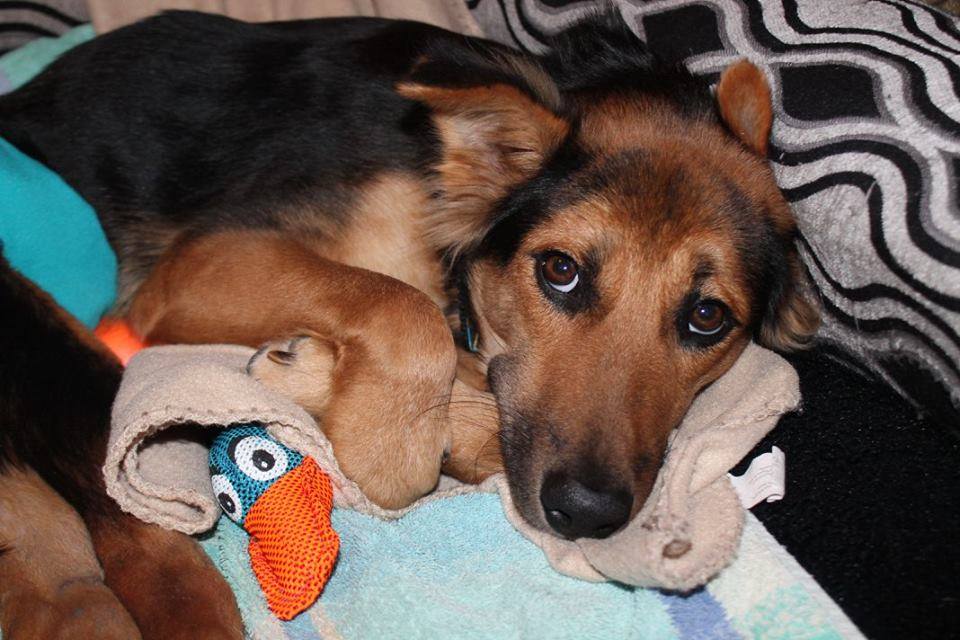 “So many people told me he would be better off put down, but you can’t put a value on a life,” she added. “He was in such distress and I couldn’t just ignore this kind of neglect. No animal deserves a life like that.” It was a hard fight, but Penman’s efforts paid off and her fundraising was a success.

Indeed, it took three long months and a lot of battling with bureaucracy. But thanks to the generosity of the public and Leo’s new-found fans, the little pup was finally ready to make the flight to his new home country. He touched down right into Penman’s waiting arms. 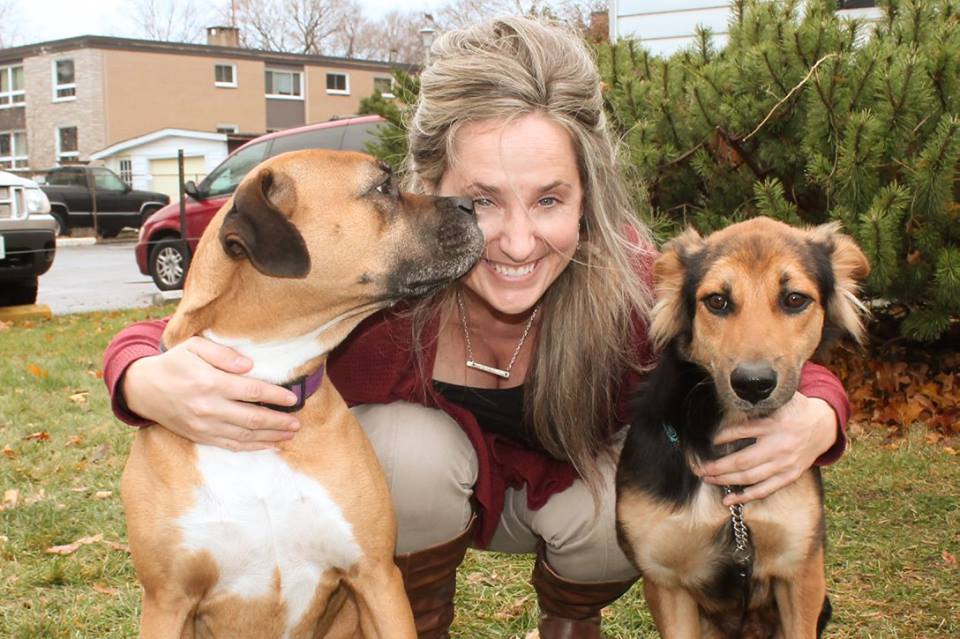 However, Penman’s modeling job and lifestyle meant that she was not able to offer Leo a forever home herself. Fortunately, though, she did find a foster home for him through social media. He now lives just eight hours away from his rescuer in Sarnia, Canada.

Leo got to experience family life with his new foster mother, Jamie Smith, who also created a crowdfunding website to help pay for the paralyzed pup’s ongoing medical bills and care. “I may be looking at adoption but finances are a difficulty for me. Leo has a lot of special needs due to his paralysis,” wrote Smith.

“He is being treated for a severe bladder infection and bladder stones. His bladder needs to be expressed regularly and he needs to wear diapers because of his bladder leakage,” she added. Thankfully, a solution was subsequently found, and he responded well to a new course of drugs.

In addition, Leo even found his feet again. Washington-based pet mobility rehab center k9 Carts donated him a lovely new wheelchair, giving the pup a new lease of life. “He got to chase a squirrel for the first time the other day — his Canadian initiation,” Penman said. 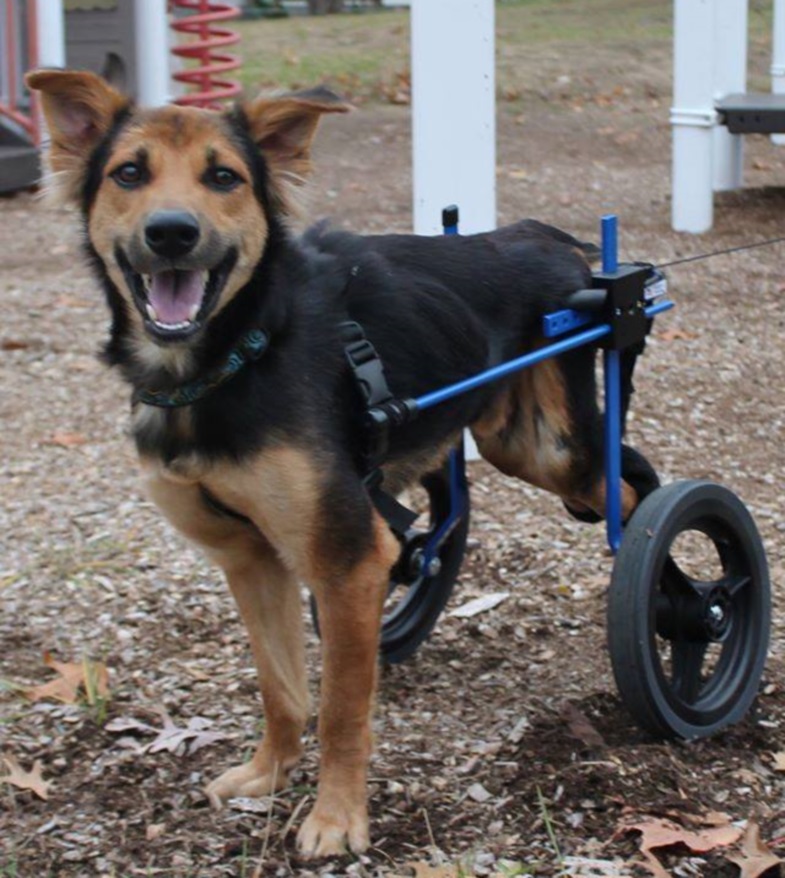 Thanks to the kindness of strangers, then, this young dog is getting to experience a life he would never have had the chance to live. As Penman said, “When I found him on the beach [all he really wanted was attention from people]. Nobody would give it to him, though, because he was in such a disastrous state. I don’t think he will have that problem any more.”

“To live a life free from sorrow, think of what is going to happen as if it had already happened.”