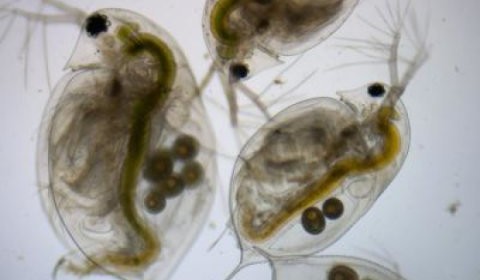 The key to helping animals evolve quickly in response to climate change could actually be their predators, according to a new UBC study.

The study is one of the first to show that species interactions, meaning the way species interact with each other in an ecosystem, like in a predator-prey relationship, is important to understanding how animals will respond to climate change. The findings, published in Biology Letters, have implications for ecosystems around the world where many top predators like sharks or polar bears are disappearing because of increasing pressure from climate change and human populations.

“Not only can predators keep prey populations in check but in some cases they can help speed up the evolutionary response to climate change,” said Michelle Tseng, a research associate in UBC’s Department of Zoology and lead author of the study. “We now understand that species interactions and evolution can play a significant role in preventing animals from going extinct in a rapidly changing climate.”

For the experiment, Tseng and her colleague Mary O’Connor, an assistant professor in the Department of Zoology, studied a small crustacean known as the water flea or by its Latin name Daphnia. These tiny organisms are key members of freshwater ecosystems around the world, and healthy lakes are typically filled with Daphnia or other similar species.

In the experiments Daphnia did not show any evolutionary response to increased temperature when there were no predators in the environment. When they lived alongside their predators, in this case a predatory fly larva, Daphnia populations evolved very quickly to a three-degree increase in water temperature.

Until recently scientists had little idea if species could evolve fast enough to save themselves from extinction in the face of climate change. In laboratory settings, a few studies had shown that some species could evolve rapidly, but these lab conditions were not very realistic.

Tseng and O’Connor set out to better understand how organisms may react to climate change in more realistic situations like those where they have to cope with finding food, finding a mate, or escaping from predators.

The UBC zoologists were surprised by their results. They thought the predators would eat enough Daphnia that their population sizes would be too small for evolution to occur; instead the opposite happened.

“In nature, no population lives in isolation,” said Tseng. “The community plays a big role in whether and how an organism responds to climate change. These results highlight the importance of conserving the entire ecosystem instead of protecting just one species.”

In the experiment, when the Daphnia lived alongside their predators, the populations evolved very quickly to a three-degree increase in water temperature.

The combination of predators and warmer temperatures resulted in an evolutionary shift in the population from a larger-bodied, more slowly reproducing population, to a population that was 10 per cent smaller in body size, and twice as fast at reproducing. This trend of both temperature and predators causing smaller body sizes is not uncommon in nature, which leads the researchers to think this benefit of predators for evolutionary rates might not be specific to just Daphnia.

Good week for:
Brazil’s soccer team, after the coach of the country’s national team announced that his players could sleep with wives and girlfriends before World Cup matches this summer, so long as there are no possibly injurious “acrobatics.”