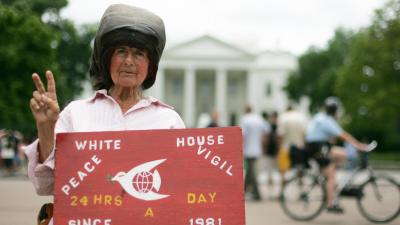 In January 2016, Concepcion Picciotto died at the age of 80 after holding vigil outside the White House to protest the use of nuclear weapons.  She was a familiar sight to passersby and tourists as she protested the use nuclear weapons.  One of her signs read “Read My Lips, No New Wars,” and one other one stated “Live by the Bomb, Die by the Bomb.”

Concepcion immigrated from Spain and lived in New York before coming to Washington, DC.  She was married and had adopted a daughter that was taken away after her ex-husband declared her insane.

Michael Moore had her appear in his documentary “Fahrenheit 9/11.”  That was when she gained wider celebrity and was critical of President George W. Bush.  In the 30 years that she spent across from the White House no president ever came over to talk with her about why she was there protesting for peace and justice.

Concepcion was honored back in 2011 by the Shafeek Nader Trust for the Community Interest.

When she had to leave the park to rest, she would have some friends sit in for her due to the fact that it is unlawful to sleep in the park or leave your protest site unattended.  Back in 2013 one time when her volunteers didn’t show she had her stuff taken away and another of her friends intervened and got them back for her.

The combined wealth of the world’s 85 richest people — $1.7 trillion — is now equivalent to that held by the poorest half of the planet’s population, some 3.5 billion people, according to a study by the nonprofit group Oxfam.