More than 100 intense Arctic wildfires have ravaged the Arctic since June, with scientists describing them as “unprecedented.”

Satellite images show huge clouds of smoke billowing across uninhabited Arctic land in Greenland, Siberia and parts of Alaska. The wildfires come after the planet experienced the hottest June on record and is on track to experience the hottest July on record, as heatwaves sweep across Europe and the United States.
Since the beginning of June, Copernicus Atmosphere Monitoring Service (CAMS), which provides data about atmospheric composition and emissions, has kept track of more than 100 intense wildfires in the Arctic Circle. According to satellite photography expert Pierre Markuse, the region has experienced fires in the past, but never this many.
According to Mark Parrington, a senior scientist at CAMS, temperatures in the Arctic are rising at a faster rate than the global average, providing the perfect conditions for wildfires to spread. “The wildfires are concerning as they are occurring in a very remote part of the world, and in an environment that many people would consider to be pristine,” he said. 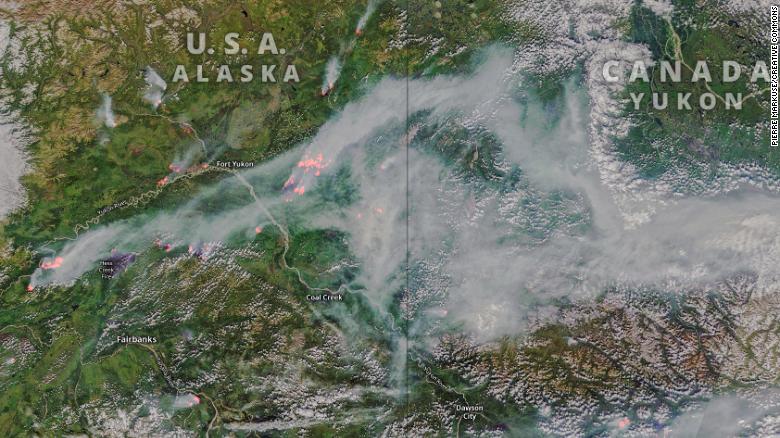 According to Dr Claudia Volosciuk, a scientist with the World Meteorological Organization (WMO), the average June temperature in Siberia, where the fires are raging, was almost 10 degrees higher than the long-term average between 1981–2010. Parrington said there seemed to be more wildfires due to local heatwaves in Siberia, Canada and Alaska.
The fires themselves contribute to the climate crisis by releasing carbon dioxide into the atmosphere. The fires emitted an estimated 100 megatons of carbon dioxide (CO2) into the atmosphere between 1 June and 21 July, almost the equivalent of Belgium’s carbon output in 2017, according to CAMS.
Volosciuk said wildfires are also increasing global warming by releasing pollutants into the atmosphere. “When particles of smoke land on snow and ice, it causes the ice to absorb sunlight that it would otherwise reflect, and thereby accelerate the warming in the Arctic,” she said.
Share this:
tagged with alaska, arctic, environment, global warming

It was a good week for painless budget cuts, after 14-year-old Suvir Mirchandani of Pittsburgh calculated that government agencies could save $370 million a year in ink and paper costs by printing all documents in the thinner Garamond typeface instead of Times New Roman.