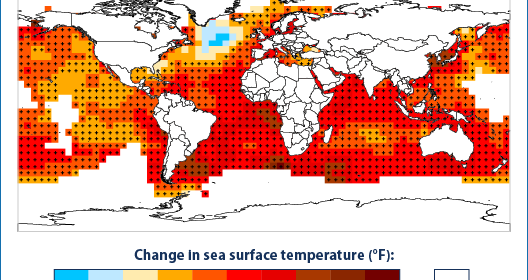 Scientists have recorded that the temperature of the oceans has been on the rise.  The temperatures have been rising at a rate of 40% on average over what they previously predicted over the past five years.  The year 2018 was warmer than the previous year and it’s still getting warmer.  Heating of the ocean plays a big role in climate change due to heat capacity of the ocean which is 1000 times larger than that of the atmosphere.  Phytoplankton productivity is declining due to the heating of the oceans.  Greenhouse gases are removed from the atmosphere by these phytoplankton and they are the foundation of the ocean food chain.  Since the warmer water at the top can’t mix with the cooler water below it stops the productivity of phytoplankton.

The warmer the water gets in the ocean causes the water to rise, more flooding, and since the water is warmer the air above is warmer which causes more hurricanes.  Since 2009 the Antarctic has been losing ice at a rate of 250 billion tons a year which may cause the ocean levels to rise at a fast rate.

The warming of the oceans will have deadly consequences. With the warmer water the coral reefs become bleached and start dying off which causes the marine ecosystems to die off.