Standing at work to stay healthy 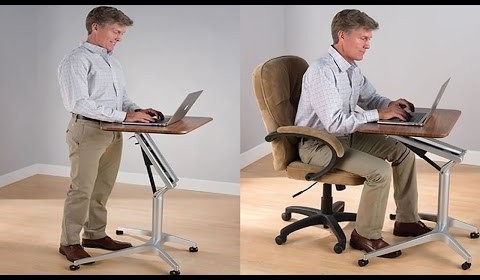 If you work at a desk, you should get up on your feet for at least two hours a day to avoid the serious health consequences of prolonged sitting, a panel of scientists has recommended.The average office worker sits for 10 hours a day, then heads home to spend the evening glued to a television or computer screen.

A growing body of research has found that hours of sitting triggers a destructive chain reaction in the body, slowing metabolism, altering hormones, raising cholesterol, and weakening muscles; over time, the result is heightened risk of diabetes, cardiovascular disease, weight gain, cancer, and a shortened life. Scientists say, in fact, that prolonged sitting does as much health damage as smoking cigarettes. And the negative effects of eight to 10 hours at a desk can’t be undone by exercising before or afterward. But British researchers have found that getting up for short breaks throughout the day can protect desk jockeys’ bodies from the effects of sitting.

Researcher Gavin Bradley says that the key is to avoid sitting for more than 30 minutes at a time. He advises “taking your calls standing; walking around; pacing; holding standing meetings; walking over to a col- league’s desk instead of sending an email; using the stairs instead of the elevator.” Eventually, Bradley says, people should aim to increase their standing time from two to four hours. “However you do it, the point is to just get off your rear end.”

“Fame comes in many sorts and sizes, from the one-week notoriety of the cover story to the splendor of an everlasting name.”