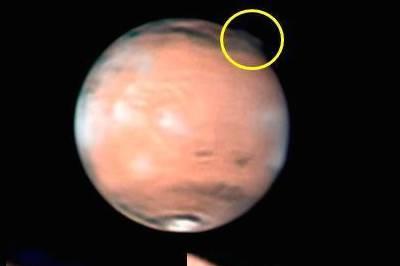 Mysterious plumes of gas rising more than 150 miles above the surface of Mars have left scientists confounded. On two occasions in the spring of 2012, amateur astronomers spotted a cloud developing on the surface of the Red Planet. The plumes, which spanned about 600 miles in diameter and changed shape constantly, appeared within a few hours and remained visible for about 10 days—before vanishing. Unfortunately, none of the spacecraft orbiting Mars caught a glimpse of them, and despite months of investigation, astronomers have been unable to determine how or why they appeared.

Although there are clouds on Mars, formed from dust or carbon dioxide, these have never been seen in the thin, upper reaches of the planet’s atmosphere. It is possible that the plumes were an unusually bright aurora, similar to the northern lights, but they would have to be unbelievably bright to be visible from Earth. Lacking concrete answers, scientists are hoping this puzzling phenomenon occurs again, and that this time it is captured by a more powerful telescope. “Any explanation we can think of,” says Agustin Sanchez- Lavega of the University of the Basque Country, “challenges our understanding of the upper atmosphere of Mars.”