The mystery of dark matter is solved 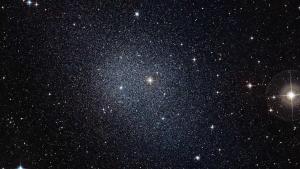 THE UNIVERSE IS A LOT OF THINGS, BUT EASY TO

understand isn’t one of them. Take the fact that more than 80% of its mass is missing. Galaxies spin so fast, they would fly apart if the gravity of some unseen mass weren’t keeping them intact, sur rounding them like a glass paperweight encasing a butterfly. Cosmologists have been trying to identify this so-called dark matter since the 1930s, and now they may have succeeded thanks to new data from a spectrometer aboard the International Space Station.

Dark-matter particles are hard to spot since they can pass through ordinary matter as if it weren’t there—billions could be streaming through your body as you read these words—but we can detect their by-products. When two of the particles collide, they give off an ordinary electron and its antimatter counterpart, the much rarer positron. In the two years the spectrometer has been in operation, it’s detected 400,000 positrons—a number consistent with what models suggest the frequency of dark-matter collisions should be.

The particles could be from some other source; the spectrometer has years of operational life left in which to nail down the ans wer. Even if it does, the riddles aren’t over. Dark matter and ordinary matter make up all the mass that exists, but that represents only 32% of the universe. The rest? Dark energy, which pulls things apart as dark matter pulls them together and helps explain why the universe is expanding. That 68% of all there is remains a deep mystery.

When two dark-matter particles collide, they should give off an electron and an antimatter positron. An orbiting spectrometer has detected 400,000 positrons.