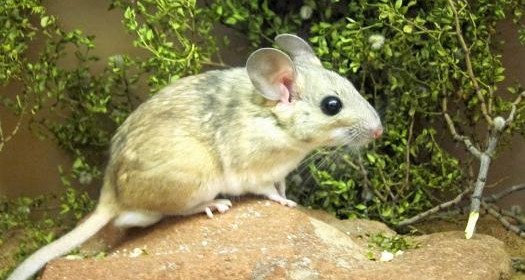 Herbivores such as desert woodrats are being forced to change eating habits as rising temperatures are making their usual diet of toxic plants unpalatable.

LONDON, January, 2016 – The desert woodrat of the US west doesn’t care for its meals to be served hot. That is because, as the temperatures go up, it tends to lose much appetite for its favourite lunch − the creosote bush in the Mojave desert.

When the heat is on, the capacity of the rodent (Neotoma lepida) to cope with toxins diminishes. And since almost all plants produce some kind of chemical defence against predation, a new study suggests that global warming could create dietary or digestive problems for herbivores of the mammal world.

Either the levels of plant toxins increase with the rise in global average temperatures as carbon dioxide levels rise in the atmosphere, because of increasing human combustion of fossil fuels or, as temperatures rise, the capacity of animals to digest those toxins decreases.

Either way, there are problems. “The phenomenon will result in animals changing their diets and reducing the amount of plant material they eat, relocating to cooler habitats or going extinct in local areas,” said Denise Dearing, professor and chair in the Department of Biology at the University of Utah.

Her co-author, biologist Patrice Kurnath, says: “We found that desert woodrats have a harder time eating their natural diet at slightly warmer temperatures. In terms of climate changes, this study suggests that plant-eating animals all over the world may have problems dealing with their preferred food sources.”

The 16th-century sage Paracelsus is supposed to have formulated the doctrine “it is the dose that makes the poison”, with the argument that everything is toxic if you consume too much.

Zoologists subscribe to a “detoxification limitation hypothesis”, which says that plants naturally produce secondary compounds as evolutionary protection against consumption by herbivores, and herbivores have in turn evolved behavioural and physiological countermeasures either to avoid, metabolise or tolerate these compounds.

“As the climate warms, herbivores may face
even more restricted menu choices”

But it follows that there must be a limit to this consumption. And the Utah scientists report in the Proceedings of the Royal Society B that they have established the maximum ingestion of the creosote bush (Larrea tridentate) that woodrats can manage at temperatures of around 28° to 29°C, and at 21° to 22°C.

The bush makes up three quarters of the woodrat’s diet, whereas other rodents would die, or at least develop kidney cysts, on a similar diet. Other research has shown that, at warmer temperatures, the liver function needed to process toxins was reduced.

“At the warm temperature, woodrats ingested significantly less creosote resin; their maximum dose was two-thirds that of animals at the cool temperature,” the authors report.

Researchers have repeatedly warned that man-made climate change, driven by global warming, threatens increasing numbers of species with extinction by altering or obliterating habitats, or by changing the synchronicity of food supply and breeding seasons.

What the Utah scientists have identified is another component of the possible cocktail of existential threats. Rabbits, marmots, deer, moose, elk, sheep, horses and even cows have diets that include toxic plants.

Research has established that koalas in Australia and possums reduce consumption to avoid toxic overdoses. Other studies have shown that white-throated woodrats eat more juniper – also toxic – at cooler temperatures.

“The mechanism that makes it more difficult for woodrats to consume toxic diets at warmer temperatures likely is not restricted solely to woodrats, and applies to plant-eating mammals in general,” Professor Dearing says.

“As the climate warms, herbivores may face even more restricted menu choices.”

“Thinking is a momentary dismissal of irrelevancies.”