The VEST is the brainchild of Dr. David Eagleman, a neuroscientist at the Baylor College of Medicine in Houston, Texas. He designed the device based on the principles of sensory substitution, the theory that scientists can transmit data gathered by the brain using one sense, and transfer it to another sense. In this case, the VEST translates touch into sound. (There are similar devices for blind people, which use auditory or tactile stimulation to help them “see” colors and shapes.)

How does it do this, exactly? The VEST connects to a smartphone app that picks up on sound signals. The app then sends the signals to the VEST via Bluetooth. From there, the VEST performs “sound-to-touch mapping” by translating the sound into a series of vibrations, which the wearer can interpret. 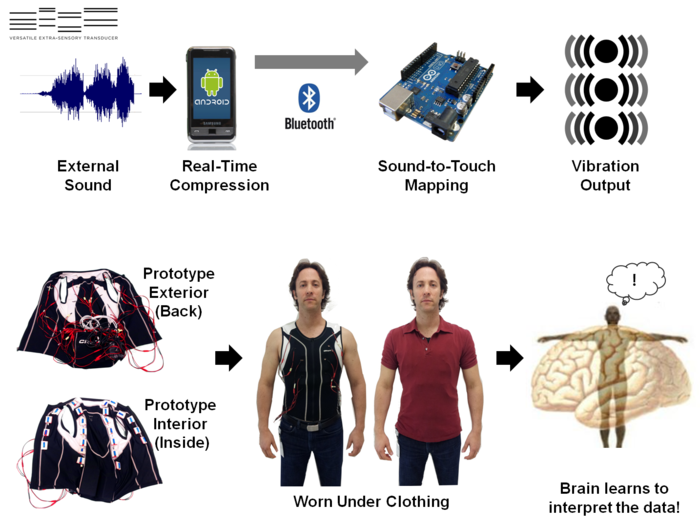 In theory, the VEST is not that different from a cochlear implant, which also works by translating sounds into vibrations. However, Eagleman says that cochlear implants cost about 20 times as much as the VEST would on the market (about $2000, according to his Kickstarter page). Additionally, cochlear implantation requires invasive surgery, which the VEST does not.

That having been said, creating a device that essentially restores people’s sense of sound is no small task. “This sensory substitution project will be the highest throughput example of sensory substitution to date,” graduate student Scott Novich says in the video. “We’re really pushing the limits in terms of how much information we can send through the human body.”

But if successful, the VEST wouldn’t just help deaf people hear again—it would revolutionize our understanding of how the brain processes sensory information, to the point where Eagleman says we could one day be able to process other types of information, like tweets and stock tips, via vibrations transmitted by a VEST-like device. And you thought your FitBit was the height of wearable technology.

Can we create new senses for humans? | David Eagleman

As humans, we can perceive less than a ten-trillionth of all light waves. “Our experience of reality,” says neuroscientist David Eagleman, “is constrained by our biology.” He wants to change that. His research into our brain processes has led him to create new interfaces to take in previously unseen information about the world around us.

TEDTalks is a daily video podcast of the best talks and performances from the TED Conference, where the world's leading thinkers and doers give the talk of their lives in 18 minutes (or less). Look for talks on Technology, Entertainment and Design -- plus science, business, global issues, the arts and much more.
Find closed captions and translated subtitles in many languages at http://www.ted.com/translate

Subscribe to our channel: http://www.youtube.com/user/TEDtalksDirector
tagged with disability, inventions, science

Homelessness has fallen 4 percent nationwide over the past year, but it has risen by 13 percent in New York City. New York and Los Angeles alone account for one fifth of homelessness in the U.S.