Backache turn out to be knife blade 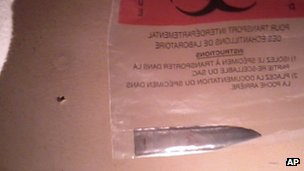 ■ A Canadian man was scratching his back when he noticed a pointy protrusion. It turned out to be a 3-inch knife blade that was buried in his flesh three years earlier. Billy McNeely, 32, said he’d often complained to doctors about chronic back pain after he was stabbed in a 2010 brawl, but physicians told him it was just nerve damage. “I’m kind of upset,” said McNeely, who had the blade dug out last week. “They should have X-rayed it right off the beginning.”

The 10 biggest tax breaks will save American taxpayers more than $900 billion this year, with 51 percent of the benefits going to the richest 20 percent of households, according to a new report by the Congressional Budget Office. The wealthiest 1 percent—those with at least $327,000 in annual income—got 17 percent of these tax benefits.