Christmas on Antarctica 100 Years Ago 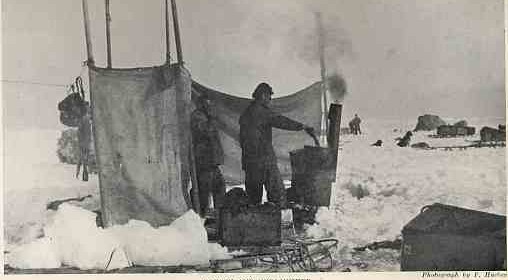 4 / 5 ( 1 vote )
Just before Christmas… November 1915, while camping on the thawing ice of the Weddell Sea, Shackleton and his men saw their ship, Endurance, going down into the waters of this sea. “She’s going, boys!” Shackleton shouted the evening of November 21, 1915. “She went down bows first, her stern raised in the air. She then gave one quick dive and the ice closed over her forever. It gave one a sickening sensation to see it, for, mastless and useless as she was, she seemed to be a link with the outer world. Without her our destitution seems more emphasized, our desolation more complete,” He wrote in his book, South!

They did not give way for depression for long. The psychological effect of a slight increase in the rations soon neutralized any tendency to downheartedness.

A month later, Shackleton informed his men that he intended to try and make a march to the west to reduce the distance between them and Paulet Island. A buzz of pleasurable anticipation went round the camp, he wrote, and everyone was eager to get on the move.

“December 22 was therefore kept as Christmas Day, and most of our small remaining stock of luxuries was consumed at the Christmas feast. We could not carry it all with us, so for the last time for eight months we had a really good meal—as much as we could eat. Anchovies in oil, baked beans, and jugged hare made a glorious mixture.”

At 3 a.m. on December 23 all hands were roused for the purpose of sledging the two boats, the James Caird and the Dudley Docker, over the dangerously cracked portion to the first of the young floes, whilst the surface still held its night crust. Shackleton’s plan was to sleep by day and march by night, so as to take advantage of the slightly lower temperatures and consequent harder surfaces. Pressure-ridges had to be skirted, and where this was not possible, the best place to make a bridge of ice-blocks across the lead or over the ridge had to be found and marked.

On the 25th, a breakfast of sledging ration was served. By 2 a.m. they were on the march. “We wished one another a merry Christmas, and our thoughts went back to those at home. We wondered, too, that day, as we sat down to our “lunch” of stale, thin bannock and a mug of thin cocoa, what they were having at home.”

All men were very cheerful. The prospect of a relief from the monotony of life on the floe raised all our spirits. One man wrote in his diary: “It’s a hard, rough, jolly life, this marching and camping; no washing of self or dishes, no undressing, no changing of clothes. We have our food anyhow, and always impregnated with blubber-smoke; sleeping almost on the bare snow and working as hard as the human physique is capable of doing on a minimum of food.”

Shackleton wrote, “We marched on, with one halt at 6 a.m., till half-past eleven. After a supper of seal steaks and tea we turned in. The surface now was pretty bad. High temperatures during the day made the upper layers of snow very soft, and the thin crust which formed at night was not sufficient to support a man. Consequently, at each step we went in over our knees in the soft wet snow. Sometimes a man would step into a hole in the ice which was hidden by the covering of snow, and be pulled up with a jerk by his harness. The sun was very hot and many were suffering from cracked lips.”

“Two seals were killed to-day. Wild and McIlroy, who went out to secure them, had rather an exciting time on some very loose, rotten ice, three killer-whales in a lead a few yards away poking up their ugly heads as if in anticipation of a feast.”

On August 8, 1914, Ernest Shackleton and his crew set off on the Endurance from Plymouth, England, for the Imperial Trans-Antarctica Expedition. This 1914-1917 expedition became one of the most heroic, endurance, survival and leadership adventure stories in history.

Good week for:
The University of Connecticut, which won both the men’s and women’s NCAA basketball championships, with the men beating Kentucky. and the women topping Notre Dame.