Climatologists have started to drill into the oldest ice core in Antarctica to find some air that may have been there around 1 million to 900,000 years ago.  The teams are from Australia, China, and Europe in a friendly type competition to find samples of air that is about 1.5 million years old. They would like to find out what […]

END_OF_DOCUMENT_TOKEN_TO_BE_REPLACED

CAPE LEGOUPIL, ANTARCTICA: From the ground in this extreme northern part of Antarctica, spectacularly white and blinding ice seems to extend forever. What can’t be seen is the battle raging thousands of feet below to re-shape Earth. Water is eating away at the Antarctic ice, melting it where it hits the oceans. As the ice sheets slowly thaw, water pours […]

END_OF_DOCUMENT_TOKEN_TO_BE_REPLACED

The warming of the world’s oceans is penetrating radar. They discovered two causing a glacier the size of California in massive undersea valleys beneath the East Antarctica to melt, and scientists fear ice sheet, one of which is 3 miles wide, its collapse could eventually cause global Those canyons allow warm, salty water sea levels to rise by as much […]

END_OF_DOCUMENT_TOKEN_TO_BE_REPLACED

Radioactive Dust From a Supernova on Antarctica

END_OF_DOCUMENT_TOKEN_TO_BE_REPLACED

Research shows there may be an entire world underneath Antarctica’s ice-free Dry Valleys, which on the surface may seem hostile to life. Below the surface lies rivers of liquid salt water which flow into subsurface lakes, every drop of which could be swarming with microbial life. One of Antarctica’s most unique features, the briny, rusty-red colored Blood Falls, could possibly […]

END_OF_DOCUMENT_TOKEN_TO_BE_REPLACED

Antarctic Fish Have Ice In Their Veins

Scientists have revealed that some fish that thrive in the freezing cold waters of the Antarctic actually have ice in their veins. A protein in their system called notothenioids not only keep the fish from freezing to death, but also keeps ice crystals in their veins. Although the ice crystals would melt at temperatures just slightly above freezing, the fish […]

END_OF_DOCUMENT_TOKEN_TO_BE_REPLACED 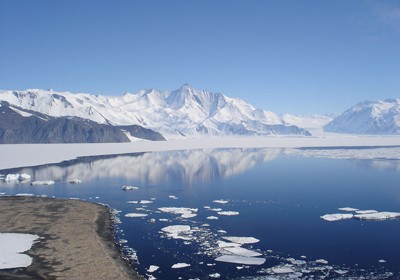 Researchers from Australia, Denmark, Germany, Norway, United Kingdom, and the United States conducted lead concentration measurements of sixteen ice core samples, and found that industrial air pollution has persisted Antarctica since its arrival there in 1889 and remains significant in the current century. Their study was published in Scientific Reports on July 28, and covered in Nevada‘s Review journal. Lead […]

END_OF_DOCUMENT_TOKEN_TO_BE_REPLACED

An expedition team in Antarctica has successfully cleared away layers of thick ice from inside the hut of the famous Australian explorer Sir Douglas Mawson, revealing a century-old frozen bowl of peas, books on the shelves, candles, matches and “old-style woolen underwear”. The team used picks and chainsaws to remove the ice that had filled the main living quarters used […]

END_OF_DOCUMENT_TOKEN_TO_BE_REPLACED

The Japanese whaling fleet is reportedly heading into the seas around Antarctica, drawing widespread condemnation from campaigners. Japan’s fleet of six ships left the port of Shimonoseki, western Japan with a quota of 940 minke whales and 10 fin whales. Calls for the Australian government to intervene have been rejected by the environment minister, Senator Ian Campbell. Japan’s whaling program, […]

END_OF_DOCUMENT_TOKEN_TO_BE_REPLACED

The Endurance was a 1915 Antarctic shipwreck which sank about 10,000 feet below an Arctic ice sheet, It was discovered by a team of archaeologists, engineers, and other researchers. The ship belonged to British polar explorer Ernest Shackleton. It sank during an attempt to cross Antarctica via the South Pole. The crew survived but the ship was unfortunately lost to […]

Bad week for:
The scientific method, after a Cornell University researcher set out to discover the worst places on the body to be stung by a bee, by systematically pressing the insects against his body parts. “If you’re stung in the nose and penis,” he concluded, “you’re going to want more stings to the penis over the nose.”