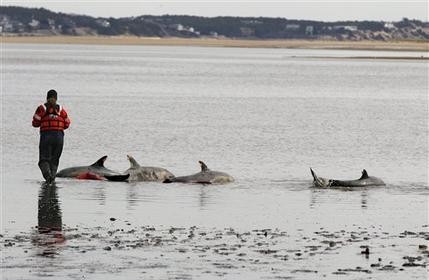 Over a two week span, more than 85 dolphins had become stranded along the craggy Cape Codcoastline, including 30 in one day, said the International Fund for Animal Welfare. Typically, 120 dolphins beach themselves from January to April, the high season for stranding. They are regularly pulled by extreme tides into the U-shaped Cape Cod Bay, but never in these numbers, said Katie Moore, manager of IFAW’s mammal rescue and research team. The most recent batch of stranded dolphins seem to be from a single group of perhaps 400, Moore said, but she had no explanation for why they landed here. “It’s driving us crazy that we don’t know.” Fifty of the dolphins were already dead when they were found, and 11 died later, a wildlife expert said. Two dozen were released into the ocean, though at least three of those have since died.