Effects of climate change on coral reefs and shellfish 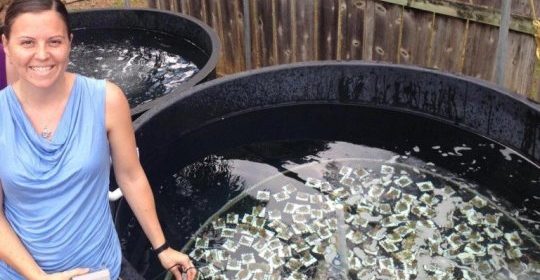 5/5 - (2 votes)
The newest professor in the University of Rhode Island’s College of the Environment and Life Sciences, Hollie Putnam, thinks some corals and shellfish might have good enough “memories” to buffer the changes in ocean chemistry that are resulting from the effects of climate change on coral reefs.

A native of Minnesota who earned a doctorate at the University of Hawaii, Putnam is studying how a wide variety of marine organisms are responding to changes in their environment. Focusing on reef-building corals and other shelled creatures that are threatened by increasing temperatures and ocean acidification, she is testing them to determine how species may acclimatize to the new circumstances.

“I’m interested in how the environment is changing, how animals respond to those changes, and the potential for acclimatization to those conditions, particularly across generations and in different life stages,” said Putnam, assistant professor in the URI Department of Biological Sciences, who joined the faculty in January. “I’m asking questions like, do offspring perform better because of their parents’ history in certain conditions, and if so, what are the mechanisms driving that.”

In one study of the effects of climate change on coral reefs, for instance, she exposed adults to increased temperature and acidification, then exposed their offspring to the same conditions to see if they are more successful because of their parents’ previous experience.

“Interestingly, we found that there is potential for beneficial acclimatization because of parental history,” she said. “There is a more positive metabolic response and ecological response, greater survivorship and growth if their parents have been preconditioned to future scenarios.”

To understand the underlying mechanism for how this may occur, she is also conducting epigenetic studies to determine where in the genome this acclimatization effect takes place.

Putnam grew up hunting, fishing and camping in northern Minnesota, and she said she was always on a path to become a biologist. She didn’t consider studying coral reef systems, however, until learning about them as an undergraduate at the University of Wisconsin. Her first job after graduating was at the Environmental Protection Agency, where she assessed the effects of chemicals on amphibians.

She said her position at URI is “a perfect match” because of the University’s reputation for marine science and the presence of other faculty who also study the effects of climate change on coral reefs and shellfish.

“And we’re just a short jump away to the Caribbean, where some of my research will take place,” Putnam added.

The professor is now setting up her laboratory and developing the courses she will teach next fall, including marine biology and marine environmental physiology. She hopes to develop an undergraduate course in coral reef studies that will include travel to one of her field sites in the Caribbean. And she said some of her graduate students will conduct studies with her at the Moorea Coral Reef Long-term Ecological Research site in French Polynesia.

Executing criminals does not balance some cosmic scale of justice.