Essay – Laugh Tracks in the Sand: a Tribute to Robin Williams (By Mankh) 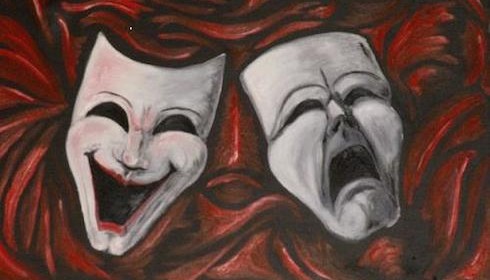 “When asked in an interview, ‘How do you define comedy?’.. George Burns responded, ‘If you laugh, it’s comedy.'”[1]

The world is a virtual tragi-comedy. Wake up in the morning, spill the coffee on the brand new white rug, start to get angry, then remember the adage “don’t cry over spilled milk,” wonder if it applies to coffee, laugh it off… Read the news about Gaza, Ukraine, Iraq… cry anyway.

Robin Williams was a personal favorite simply because he got me to laugh out loud way more than when listening to most other comics. Victor Borge is also at the top of my laugh list. Two styles. Virtual polar opposites. Same effect. Laughter. Go figure.

In the 1980s, one night when I was at a comedy club in New York, Robin Williams happened to show up and do a thirty minute set. For the first fifteen minutes I couldn’t stop laughing. For the second fifteen minutes I didn’t laugh, not because it wasn’t funny but because I physically couldn’t laugh anymore. In retrospect, perhaps that was indicative of the manic and depressive energies that swayed Williams for much of his career and life.

After the 9-11-2001 attacks he did a comedy special “Robin Williams – Live On Broadway” (2002), and to be able to laugh after the trauma (and sudden pronouncement that all the world’s no longer a stage but a war on terror battleground) was truly comic relief, especially for New Yorkers. At the beginning of the show Williams exclaims, with appropriate accent, “We’re here in New York fuckin’ New York… Obviously this is not going to be your normal night of theater.”

Comedy is like an amusement park mirror. You get an immediate response from the audience and if it’s not laughter (people contorted in all shapes and sizes) you start looking for better jokes, or another job.

Laughter is an antidote to dogmatic thinking (no offense to dogs) and to fear. In the film “The Name of the Rose,” from Umberto Eco’s novel with the same title, there is a very telling bit of dialogue:

William of Baskerville: But what is so alarming about laughter?

Jorge de Burgos: Laughter kills fear, and without fear there can be no faith, because without fear of the Devil there is no more need of God.

No Devil. No God. Whatta concept! Would that make us all Buddhists? Atheists? Either way, we’re Human Beings trying to figure it all out and have some laughs along the way.

Theatrical Masks and the Middle Way
Some of stardom’s pitfalls can be traced to the theatrical symbol of two masks, rooted in ancient Greece; one has a wacky smile, the other a petrified frown. Though perhaps not so simple to solve the riddle, various spiritual traditions provide some clues to help deal with such personal struggles. Buddhists espouse the Middle Way and Kabbalah’s Tree of Life has three pillars, left, right, and middle or central. Both examples encourage balance. Yet and still, when one is in the thick of the limelight it can be, as Robin Williams exemplified, a challenge to find such balance.

The roots of the word suicide essentially translate as, “to cut down one’s self.” The irony of such high profile suicides is that the self-perpetrator has typically made a career of pleasing others while remaining unsatisfied with his/her self.

It’s been said that to commit suicide is to take the easy way out. For some, such as East Indian farmers whose basic means of support has been shattered by such toxic agri-businesses as Monsanto, suicide is perhaps a more understandable act of desperation (as well as a help to the family who might collect some insurance money). Without knowing for sure the level of pain and anguish Robin Williams was going through it’s useless to speculate, but it’s sad, as well as telling, that another person who seemingly had it all found that all to be not enough.

It’s not for anyone to judge what Robin Williams did; better to give thanks that he added so much laughter to a world too often sucked down in tragic news.

In his honor, may we all keep laughing for laughter’s sake, as well as use laughter to help kill fear. May we all keep laughing as a means to help render useless the blind obedience to the global corporate militaristic greedy empire whose self-professed leaders too-often try to dictate (with the most serious and duplicitous faces) what the world is about. And may we be spared from seeing those same supremacist control freak elites flashing their shit-eating grins. Their set of Greek masks are both scary.

Over Easy or Hard?
According to writer Bill Persky, “Probably the most revealing remark ever made about comedy was uttered by revered and beloved old character actor Guy Kibbie, on his deathbed. It was the final day of a long and painful illness, and when his good friend Lawrence Olivier came to say a final farewell, he couldn’t help but ask his obviously suffering friend the difficult question that was haunting him: ‘Is dying hard, Guy?’ To which Kibbie replied with a tortured breath.. ‘No Larry, dying is easy, comedy is hard.’”[2]

Robin Williams did one of the hardest and most needed things to do — make people laugh. If only he could have laughed at himself a little more.

Hey, Robin… on your flight out of this beautiful nightclub called Earth, if you discover the cosmic joke, be sure to, somehow, drop us a line.

Notes:
1 – from a short essay “The Gift of Laughter or What To Do, When Your Socks Don’t Match” by Bill Persky, in the anthology, Modern Muses: How Artists Become Inspired (2005), edited by Mankh.
2. Ibid.

Aug. 12 (Bloomberg) -- Actor Robin Williams died Tuesday at age 63 of suspected suicide. This is a clip of Charlie Rose's interview with Williams from 2009 when the comic was getting back into stand-up for HBO's "Weapons of Self Destruction." "Charlie Rose" airs weeknights on Bloomberg Television at 8p & 10p ET.

Bloomberg Television offers extensive coverage and analysis of international business news and stories of global importance. It is available in more than 310 million households worldwide and reaches the most affluent and influential viewers in terms of household income, asset value and education levels. With production hubs in London, New York and Hong Kong, the network provides 24-hour continuous coverage of the people, companies and ideas that move the markets.
tagged with comedy, essay, mankh, robin williams, tribute

Good week for:
Knowing the known unknowns, after former Secretary of Defense Donald Rumsfeld filed his taxes with a letter advising the IRS that since the tax code is so complex, “I cannot have any confidence that I know what is being requested.”