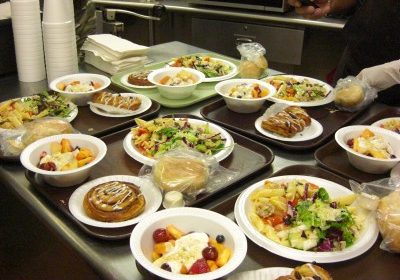 A Stranger in the Soup Kitchen Spills the Beans

I have a friend, old and retired, who keeps busy helping the poor. Let’s call him Ted because he wants to remain anonymous. Some of his ideas, he says, wouldn’t make many of his neighbors happy.
Ted has had problems of his own in life. No need to list them. He managed to survive them. As a result, he knows what the poor are up against. And he believes that in 2017 their plight will be worse in the United States and elsewhere in the world. Bigger odds are piling up against them.
It won’t be any easier for Ted, either, now a solid member of the lower-middle class having escaped a life of poverty. For example, he has always wondered why car insurance, house insurance, estimated taxes and property taxes all come due in November and December. He says it’s like having the Grinch chew on his posterior during the holidays.
While his income in retirement remains stagnant, his bills, Ted says, are always rising.  Fortunately, he and his wife have planned ahead over the years and have been able to make things work despite modest salaries and even a more modest retirement income. They may not eat steak but they still have enough left to donate something more than their time to charity.
But every time Ted pays a bill he thinks about the stranger he met at the local soup kitchen where he volunteers as a server two days a week. The man was eating by himself as usual. Ted had finished his time behind the steam table, approached the man and asked if he could sit down and talk with him.
The stranger said okay and it only took a few minutes for he and Ted to get along. Ted said the stranger probably would have talked to anyone who sat down. He obviously needed to talk.
Eventually the stranger told Ted the current chapter in his life story. It wasn’t a pretty thing to hear. But his life today may be typical of what many of the poor and elderly are living with now. And this is not happening in some Third World country. It’s happening in the United States, where people from other nations want to live.
The stranger said he can’t afford his little house and laughed slightly when he said he was too old for a tent. He lives in one of the row houses built after World War II. He said utilities, taxes and insurance make it hard to stay there. Not much left for food or prescriptions. He also has a bit of a heart problem. Nothing that taking his medication regularly can’t keep in check.
Being alone is difficult enough, the stranger said, but the hot lunches at the soup kitchen help him pay his other bills. This is his only hot meal of the day unless you count an egg in the morning with a slice of toast. Otherwise he snacks on crackers and cheese. And the cheese is free, he said, given away once a month by another charity over on the other side of town.
Listening to the stranger, Ted felt very fortunate. He and his wife have always been able to pay their bills. They eat well enough, nothing fancy, and they dine out once every two weeks at a fast food restaurant. Chicken fingers with a rainbow of sauces. However, Ted has new concerns about the stranger and the other poor in his community and throughout American society. He has heard that a new tax plan is being considered by Congress, a tax plan that will force a worker with a spouse and two children to pay taxes if their income is $12,000.
Ted would hate to have to live on $12,000 if he were by myself much less with a wife and two children.
He says that as the middle class continues to evaporate and the poor continue to get poorer, he finds less empathy at his level and above for either group and he doesn’t expect that to improve in 2017.
America’s old people, he says, are truly up against the wall. As time goes by, he thinks their problems will grow more severe. He doesn’t know what the poor and elderly will do if that new tax plan becomes law. And he thinks that in 2017 the time is ripe for that to happen in Washington.
Ted admits many people spend too much of what little they have and don’t worry about their future, But in his volunteer work, he finds many of the poor spend what little they have to get to the future.
Some things, Ted says, are worth writing to one’s representatives in government about. He has already written to his senators and his representative about this restrictive tax law and hopes it won’t pass. He hopes other Americans will write to their representatives as well.
He thinks there will be plenty of other opportunities to write letters in 2017 and the years ahead to help stop potential laws like this.
The electorate has spoken, he says, and it will be awhile before they have a chance to speak again.
Donal Mahoney

Donal Mahoney lives in St. Louis, Missouri. He has had fiction and poetry published in various publications in the U.S. and elsewhere. Among them are The Galway Review (Ireland), The Recusant (England), The Missing Slate (Pakistan), Guwahatian Magazine (india), Bluepepper (Australia), The Osprey Journal (Wales), Public Republic (Bulgaria), and The Istanbul Literary Review (Turkey). Some of his earliest work can be found at http://booksonblog12.blogspot.com and some of his newer work at http://eyeonlifemag.com/the-poetry-locksmith/donal-mahoney-poet.html#sthash.OSYzpgmQ.gpbT6XZy.dpbs