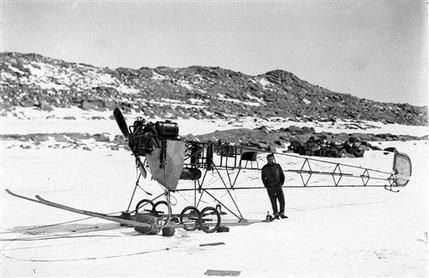 The expedition is in Antarctica to help conserve huts used by the Australian explorer Douglas Mawson in the early twentieth century. The team unsuccessfully searched for the aircraft for three summers. The plane, which was a single-engine Vickers built in 1911, has been lost in the Antarctic ices since 1975. It was the first aircraft produced by the Vickers plant in France.

Before Mawson’s 1911–14 voyage, the expedition plane was damaged due to a crash. Mawson had apparently decided to use the machine as a motorized sled instead; however, the engine wouldn’t function properly under very low temperatures, and the plane was later abandoned.

“[We’ve used a] Magnetometer, ground-penetrating radar, metal detectors and all sorts of things to try and look for it, but in the end it was just a combination of a very low tide, good weather and a thin ice melt,” commented Tony Stewart, a member of the team, as quoted by the Australian Broadcasting Corporation. “Our carpenter was just taking a walk along the beach and just saw the metal in 10 centimeters of water, just right next to the ice.”

“The ice melts back very quickly, it’s on the edge of a harbor which is covered in sea ice most of the year and then as summer comes the edge of the ice gradually pulls off in huge chunks,” he continued. “This is the first time those rocks have been exposed in that area for some time so we’ve been walking around that area above the air tractor not knowing it was there under our feet all this time.”