A huge research ship costing £200 million has been commissioned, which will probe the oceans and climate of the arctic and Antarctic.

They are the cruel seas where Britain’s greatest adventurers made their names.

Now the territory of Scott and Shackleton, will be surveyed by a new generation of British explorers who will tackle the ‘final frontier’ of Earth’s polar regions.

A huge research ship costing £200 million has been commissioned, which will probe the oceans and climate of the arctic and Antarctic, George Osborne will announce today.

The new vessel, to be operated by the British Antarctic Survey, will replace the UK’s two current polar exploration ships, which are nearing the end of their lives.

Although primarily for research, the government said the ship would also allow Britain to “maintain our presence” around the British territories in the South Atlantic.

Tensions have been mounting in the Falklands over recent years. Earlier this month Argentina accused the UK of provocation over plans to hold military exercises in the Islands.

China is also eyeing up Antarctica, which is rich in oil, coal and mineral deposits, for resource exploration, something that would be stiffly resisted by the West.

The ship will have on-board laboratories and carry technology including robotic submarines and “underwater gliders” to gather data on marine biology and ocean conditions. 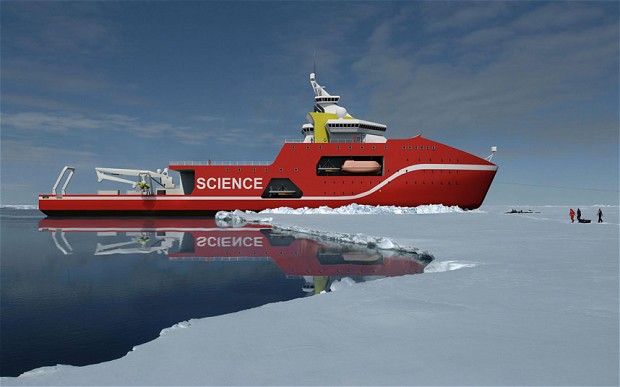 Mr Osborne said: “One of the final frontiers in the world where there is still much discovery to be done are the polar oceans. Britain must continue to have a presence in these parts of the world.

“But our two current polar exploration ships are nearing the end of their life and need replacing. So I am delighted that we are investing in a new polar research ship to carry cutting edge British technology to put British scientists at the forefront of research in both the Antarctic and the Arctic oceans.”

The ship will and will be able to carry out longer voyages than the current vessels.

The Government is currently running an annual budget deficit of more than £100 billion – around a seventh of its total spending.

However, the Treasury insisted that spending on projects like the research ship is justified because it could lead to scientific discoveries that yield long-term economic benefits.

Mark Simmonds, the Minister for the Polar Regions, said: “A new state-of-the-art polar research flagship will extend the UK’s capability and reach in polar waters. It also makes explicitly clear our long-term commitment to maintaining our presence and scientific excellence in South Georgia & the South Sandwich Islands and the British Antarctic Territory.”

At his speech, the Chancellor will also launch a consultation with the scientific community to inform the Government’s allocation of the £7 billion investment budget for large capital projects in science and research announced last year.

The consultation is designed to ensure that the money is targeted at areas scientists believe will bring the greatest opportunities for applications in business in an effort to rebalance Britain’s economy.

Mr Osborne said: “While as a country we have a proud record in scientific ingenuity, too often it has been other countries that have enjoyed the economic opportunity from it.

“Our long term economic plan is about ensuring Britain benefits from its scientific excellence.

“That is why we are taking the difficult decision to protect the science budget over the next Parliament. We are committing £7 billion – no other government has made such a long term commitment.”

It was a good week for painless budget cuts, after 14-year-old Suvir Mirchandani of Pittsburgh calculated that government agencies could save $370 million a year in ink and paper costs by printing all documents in the thinner Garamond typeface instead of Times New Roman.