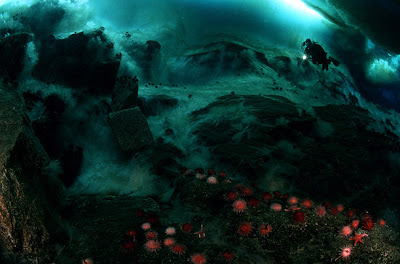 Despite no exposure to sunlight or fresh air for more than a million years, a lake located half a mile beneath the Antarctic ice sheet sustains an entire ecosystem, scientists have confirmed—raising the prospect that life might exist in similar environments elsewhere in the universe. Researchers had long suspected the existence of tiny life-forms living below the ice pack, and the effort to prove it has taken 10 years and cost more than $10 million.

First, the team had to design a drill that could bore a hole through more than 2,000 feet of ice without introducing bacteria or other contaminants, and then it had to drag more than 1 million pounds of equipment on giant sleds across the frozen terrain. Only then were team members able to begin collecting samples from the subglacial lake. Within these samples, they found roughly 4,000 species of microbes, alive and well.

With no other organisms on which to feed, the microbes survive on tiny minerals in the bedrock and sediments—in other words, they eat rock. “The first time we went to Antarctica and the first place we selected to drill a hole, we found life,” says Louisiana State University professor Brent Christner. “So it’s not much of a stretch that in similar conditions—like on [Jupiter’s] icy moon Europa—life could exist.”

It was a bad week for driving with kids, after police got a 911 call about a woman’s screams issuing from a Massachusetts man’s car, and surrounded him. Instead of finding a woman in distress, officers discovered several goats in the back seat, and let him go.