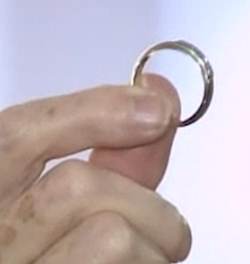 ■    Chris Bires lost his wedding ring out of an act of charity, but a stranger’s charity helped him get it back. The 41-year-old had given a pocketful of coins to a street saxophonist while walking to work in Chicago, not noticing that he’d handed over his ring as well. When he returned to the spot, the musician was gone, and Bires figured his ring was, too. Then, passing by weeks later, he was approached by Bonita Franks, who had witnessed his frantic search.

The 61-year-old panhandler had since spotted the sax player and recovered the ring—and had been saving it for Bires until she saw him again.