Cereals – which include rice imports – decreased along with nearly every other food as classified by trade groups, and continued a downward trend that contrasts with larger imports in 2014.

The low imports come despite a prolonged drought, much publicized in North Korean media which may have effected summer harvests.

“There can be no disagreement that North Korea’s food production level is severely low compared to other countries … Their agriculture technology is outdated, supported by weak infrastructure and monetary support,”  says Kim Young-hoon of the Korea Rural Economic Institute.

“It is true North Korea suffered from spring drought, but annual production during spring is not that big. It is bit early to talk of food production after autumn, but there has been no sign of an unbearable natural disaster that affected North Korea’s farming.”

Kim also noted the worst affected area South Hwanghae Province could be exception due to the water shortage stretching into the early summer. Rice production in the area would likely be very low compared to previous years, but added it’s also possible to grow substitute crops.

“(However) despite Hwanghae province’s drought, there is no sigh that North Korea will suffer more from hunger than they ever did before,” Kim said.

According to the ITC Trade Map, the DPRK hasn’t attempted to make up any shortfalls by importing from other countries. Although not all governments make their trade figures available at monthly intervals, the DPRK does not appear to have sourced cereals from other locations so far this year.

In total, North Korean imports of cereals are well below their 2014 equivalents, with no summer increase in imports observed.

The numbers also highlight how little North Korea relies on other countries for its cereal imports, with only Russia sending relatively large but infrequent shipments since the start of 2014. 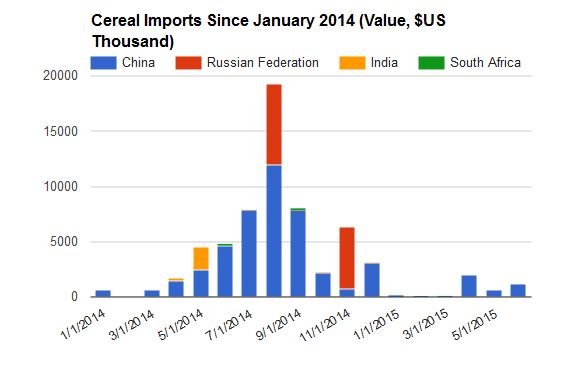 In contrast, North Korea spent less on cereal imports than it did on many consumer electronics product this year. At approximately $8 million since January, the figure is less than portable computers ($20 million), cell phones ($35 million) and LCD TVs ($22 million).

The news comes as Voice of America yesterday reported that rations allocated by North Korea’s public distribution system (PDS) were once again on the increase, after falling to very low levels in July.

The Washington based news outlet cited the UN’s Food and Agriculture Organization (FAO), which claimed the PDS was providing 380g of food rations per day, 10 grams off the 2013 and 2014 amounts.

The levels however are still well below the UN recommended intake of 600g per day per person. 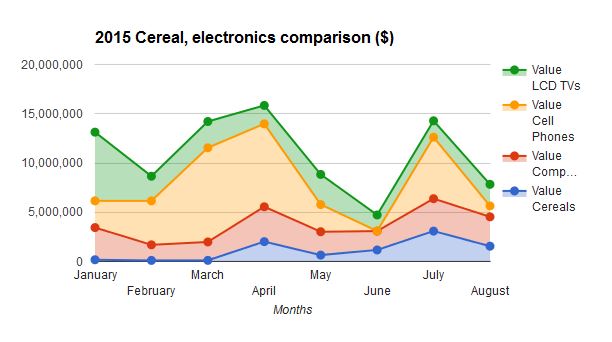 Bad week for:
Loving your cellphone, after a man jumped onto New York City subway tracks to retrieve his, and had to press himself in a gap as a train passed over him. After the train screeched to a halt, the man climbed out from under it and ran away.