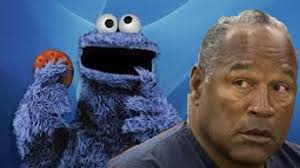 ■ O.J. Simpson was caught red-handed trying to steal more than a dozen cookies from a Nevada prison cafeteria, says the National Enquirer. The former gridiron great who is serving 33 years for armed robbery, was walking to his cell after lunch when a guard noticed a bulge in his jumpsuit. “Everyone thought he had smuggled in a cellphone” said a source, “so when the guard started pulling [oatmeal] cookies out of O.J.’s shirt, the other inmates started laughing so hard they nearly fell over” Simpson, who has swelled to more than 300 pounds in jail, received a warning.

O.J. Simpson, who's currently serving a 33-year-sentence for robbery, is accused of doing stealing sweets from the cafeteria ...

With the number of rich people booming worldwide, there’s a growing demand for domestics to serve them. Four decades ago, there were only a few hundred butlers left in Britain; today there are 10,000. The fastest-growing butler market: China.