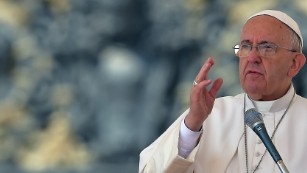 The pope hopes his encyclical on the environment will capture a wide audience.

The problem is “aggravated,” the Pope said, “by a model of development based on the intensive use of fossil fuels.”

Francis argued that if present trends continue, the evolving climate will have severe implications for poor communities who lack the necessary resources to adapt or protect themselves from natural disasters.

Many will be forced to leave their homes, while the economically and politically powerful “mask” the problems or respond with indifference, the Pope said. The affects on the poor seem to be merely added to agendas as an afterthought.

“The Earth, our home, is beginning to look more and more like an immense pile of filth,” Francis said. “In many parts of the planet, the elderly lament that once beautiful landscapes are now covered with rubbish.”

“Indeed, when all is said and done,” the Pope said of the poor, “they frequently remain on the bottom of the pile.”

He demanded swift action to save the planet from environmental ruin, urging world leaders to hear “the cry of the earth and the cry of the poor” and plunging the Catholic Church into political controversy over climate change and the Earth’s Ecosystem.

The Pope’s encyclical was by far the most controversial papal pronouncement in half a century. It addressed the issues at hand in relation to businesses, legislation, and science alike, making it clear that it is everyone’s responsibility to protect our planet from the state it’s in.

“Men are contented to be laughed at for their wit, but not for their folly.”