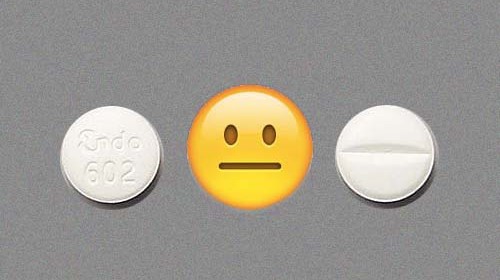 Every week, more than 50 million Americans take acetaminophen, the active ingredient in Tylenol and many other popular painkillers, to ease their aches and pains. But a new study has revealed that the drug also dulls emotions—including happiness. Prior research showed that acetaminophen can help take the sting out of negative feelings like dread, but the new findings from Ohio State University researchers suggest it may actually blunt all emotional reactions.

Scientists studied a group of 82 college students, some of whom received 1,000 milligrams of the painkiller while others were given a placebo. Presented with a series of photographs meant to trigger emotional reactions, subjects who had taken the drug reacted much less extremely to both positive and negative images than those who had taken the placebo. Heartwarming pictures, such as people playing with pets, were less pleasurable, while disturbing photos, like malnourished children, were not as upsetting. Exactly how the drug affects emotions remains unclear, and whether or not other pain relievers, like ibuprofen, have similar psychological effects is still under investigation. “This means that Acetaminophen dampens all emotion. using Tylenol or similar products might have broader consequences than previously thought,” says the study’s lead author, Geoffrey Durso. “Acetaminophen can be seen as an allpurpose emotion reliever.”

The number of college students in the U.S. fell by 2 percent this year compared with last, a decline caused by a combination of demographics, a tepid economy, and high tuition costs. The decline is likely to continue, since the number of new high school graduates peaked in 2011 and isn’t predicted to return to that level until 2024.