The evolution of justice 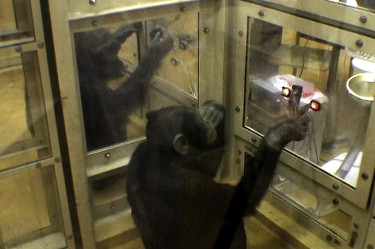 Chimpanzees, our closest relatives, turn a blind eye to crimes that don’t affect them directly, suggesting that third-party punishment— the foundation of complex societies governed by laws s and courts—is a uniquely human development. German researchers trained chimpanzees to 1 play one of three roles while facing one another in cages: One was given access to food within reach of his cage, another could 1 pull a rope to steal the food for himself, and the third could push a button to “punish” the thief by preventing him from getting the treat. None of the chimps pushed the button to punish the thief—even when the victim was a close relative. But when chimps were given the chance to punish the thief for stealing from them, they did. That suggests that humans’ innate sense of justice, which “can allow for cooperation to move beyond simple tit-for-tat,” evolved after our species split from chimps some 5 million years ago, Keith Jensen, a developmental psychologist at Queen Mary University of London, tells DiscoverMagazine.com. Humans’ heightened cooperative capacity was likely key to their evolving bigger brains—and more successful societies— than those of their primate peers.

“It is one of the great charms of books that they have to end.”