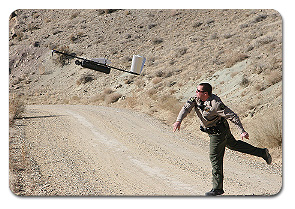 Drone warfare is now coming to your own backyard, said Glenn Greenwald. Local police have begun using unmanned Predator drones like those used in Afghanistan and Pakistan to conduct surveillance of criminal suspects right here in the U.S. This chilling step toward “a Surveillance State”—without the public’s knowledge or consent— was revealed last week by the Los Angeles Times, which detailed the use of two Predators to spy on and apprehend three North Dakota farmers.

The farmers—who belong to a group that claims the federal government has no authority—had refused to hand over six cows that wandered onto their land. Police called in the drones, whose high-resolution cameras pinpointed the men’s location and determined that they were unarmed. It’s no accident that some of the first Americans to be targeted by drones were political dissidents. Will “dangerous” Tea Partiers or Occupy Wall Street protesters be next? Drones have an unprecedented ability to hover silently overhead for hours, and are “the ultimate tool for invasive, sustained surveillance and control.” You’d have to be “pathologically naive” not to see the potential for abuse.

Forty percent of all food in the U.S. ends up in the trash, according to a new report by the Natural Resources Defense Council.The average family of four wastes $2,275 in food each year, or 20 pounds per person per month.