As the world advances with more and more handheld devices, ‘Text Neck’ is becoming a world-wide health concern, affecting millions of all ages and from all walks of life. Widespread overuse of handheld mobile technology is resulting in a harmful and dangerous physical condition on the human body, which is known as ‘Text Neck’. The term, and the health condition, is derived from the onset of cervical spinal degeneration resulting from the repeated stress of frequent forward head flexion while looking down at the screens of mobile devices and ‘texting’ for long periods of time. While certainly a fairly new medical term, the condition is impacting millions and is a growing critical global concern.

Of the 6 billion people in the world, over 4 billion have mobile phones. Texting has become the dominant form of communication. Billions of text messages are sent every month worldwide. On the Average, Americans spend 2.7 hours per day communicating and socializing on their phones, and even more time looking down at their mobile devices for web searching and so many other uses. Of course, Text Neck is not limited to the results of texting and overuse of cell phones.
People of all ages spend countless hours daily hunched over numerous types of handheld devices. Mobile technology has been designed for just about every application. Tablets, PDA, MP3, game consoles, e-readers, media players, digital camera and video recorders, the list goes on and on. 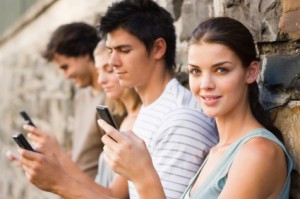 While 75% of the world’s population spends hours daily hunched over their handheld devices with their heads flexed forward, they are all in constant danger and at risk of developing Text Neck. The frequent forward flexion causes changes in the cervical spine, curve, supporting ligaments, tendons, and musculature, as well as the bony segments, commonly causing postural change. Among the chief complaints associated with Text Neck are pain felt in the neck, shoulder, back, arm, fingers, hands, wrists and elbows, as well as headaches and numbness and tingling of the upper extremities.

If left untreated, Text Neck can result in serious permanent damage including:

Flattening of the Spinal Curve          Onset of Early Arthritis

Awareness must be spread to alert people to this very real condition. Look around you, wherever you are. Almost everyone is looking down at their handheld devices without a clue as to the harm they are causing their bodies.