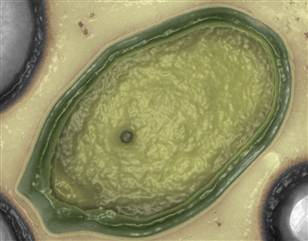 A huge virus discovered in sediment on the Chilean coast and another in an Australian pond are not only the largest scientists have ever seen, but also among the most baffling. A single so-called pandora virus is 1,000 times the size of the influenza virus and holds 2,556 genes, compared with the flu’s 13. Only 6 percent of its genes resemble those found in other organisms, leading some scientists to conclude that it may represent an entirely unknown form of life. The virus may “have emerged from a new ancestral cellular type that no longer exists,” study author Jean-Michel Claverie of Aix-Marseille University in France tells NPR.org. It could even have originated on another planet.
“At this point we cannot actually disprove or disregard this type of extreme scenario,” Claverie says. Most viruses are tiny in order to infect larger cells and use them to manufacture more viruses. Experts say the pandoraviruses appear to pose no threat to humans. “But again,” Claverie says, “never say never.”

“We condemn in others the wrong we don’t want to face in ourselves.”