After 911, everything just seemed to change in the world of travel and security. Since then we have lived in a world of added hassle and inconvenience, all in the name of safety. By now, citizens have accepted these facts as part of their everyday lives, but what if these hassles and inconveniences had resulted in everything around us becoming clogged with human feces?

That is exactly what happened with the Bay Area Rapid Transit system, or BART, when they decided to close all of their public bathrooms in the name of security.

After 911, BART decided to close down all public in their underground station restrooms in downtown San Francisco, Oakland, and Berkeley. They claimed the reason was because it would be easy for terrorists to hide bombs in the restrooms which could endanger people. It was DEFINITELY not because the janitor wanted to get out of having to clean dozens of God forsaken public toilets. Well, you can imagine the end result was. 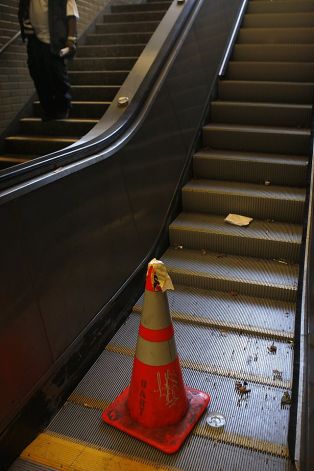 The kind of people who frequently defecate in public toilets (and occasionally in sinks, on floors, etc.) aren’t going to stop defecating just because the restrooms went away. There came a point when BART had to close down its escalators for maintenance. When they opened them up in the toilet-less stations, they found so much feces packed in the gears that they had to call a HAZMAT team to clean it up.

As it turns out, the stations are a popular place for the homeless to spend the night, and with no restrooms available, the escalators apparently became a popular place for the homeless to relieve themselves and leave behind as little evidence as possible. It’s apparent that escalators do not discriminate as to what they will devour… Be it pant legs, shoe laces, or… poop!

So, in order to prevent the possibility of a hypothetical terrorist weapon of mass destruction blowing up underground toilets, they instead created an actual bio-hazard as a result of their cautionary measures. So, enjoy your commute, Bay Area! That smell under your feet is there for your safety.